Rising from the ashes of his failing media dung heap, Glenn Beck has reemerged to prove that nobody is better at hyperbolic inanities than the once and future master of the blackboard arts. Best known as a conspiracy crackpot, Beck has faded into the ether while grasping desperately at straws to revive his joke of a career. 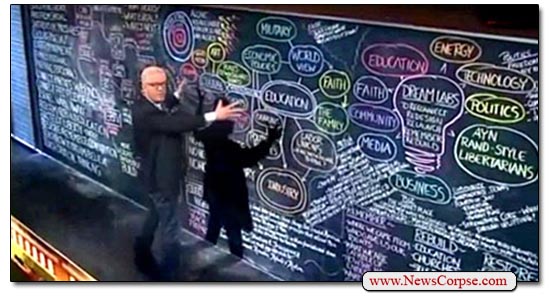 However, Fox News, the one platform that still honors the brand of idiocy that Beck excels in, has thrown him an anchor in the hopes of inflating the prospects of Donald Trump’s reelection. What could go wrong?

Beck appeared with Sean Hannity on Monday night and was characteristically Beck-ish. The key take-away from this love fest between two Trump-fluffers was Beck’s frantic assertion that “If the Republicans don’t win in this next election, I think we are officially at the end of the country as we know it.”

Glenn Beck was on Hannity's show last night claiming that "If the Republicans don't win in this next election, I think we are officially at the end of the country as we know it."

Old enough to remember when the passage of health care reform ended the country. pic.twitter.com/z7X5DHo9yH

Glenn Beck, November 2016: “This guy [Trump] is dangerously unhinged. And, for all the things people have said about me over the years, I should be able to spot Dangerously Unhinged.”

So what might have brought about this 180 degree flip-flop on the part of Beck, who is ordinarily so stable and consistent (that’s sarcasm, btw)? Could it have something to do with the fact that his media empire is floundering? The guy who previously tried to rescue his sinking career by admitting that “So much of what I used to believe was … a sham,” has suffered an economic Armageddon of his own. His Blaze Media enterprise, which once boasted aspirations of being the next Disney, has run through a throng of executives and pallets of cash. Recently it agreed to a desperation merger with CRTV, a puny right-wing video blog run by Fox News’ Mark Levin.

Apparently, that wasn’t enough to save his sorry arse either. So he shows up Sean Hannity’s Trump Suck-Up Hour to try to reinvent himself once more in the mold of the neo-fascist demagogue he originally sought to be. But with an even more pathetic and subservient demeanor that kowtows to both Hannity and Trump. It would sad if it weren’t so gratifying that these jerks eventually get what they deserve.

4 thoughts on “Flip-Flop: Glenn Beck Now Says that Not Reelecting Trump Would Be ‘The End of the Country’”