Texas governor Rick Perry is officially in the race for president. The question now for America is: Do we want a president who may be even more ignorant than George W. Bush?

Perry graduated from Texas A&M with a 1.9 GPA or D average. He received mostly C’s and D’s in his courses, including a C in U.S. History, a D in Principles of Economics, and even a C in gym. And he is an advocate for the sort of education that would bring everyone else down to his level.

“I am a firm believer in intelligent design as a matter of faith and intellect, and I believe it should be presented in schools alongside the theories of evolution.”

But that’s just for openers. Here are some things that voters will need to know as Perry’s revival show gears up for a national tour: 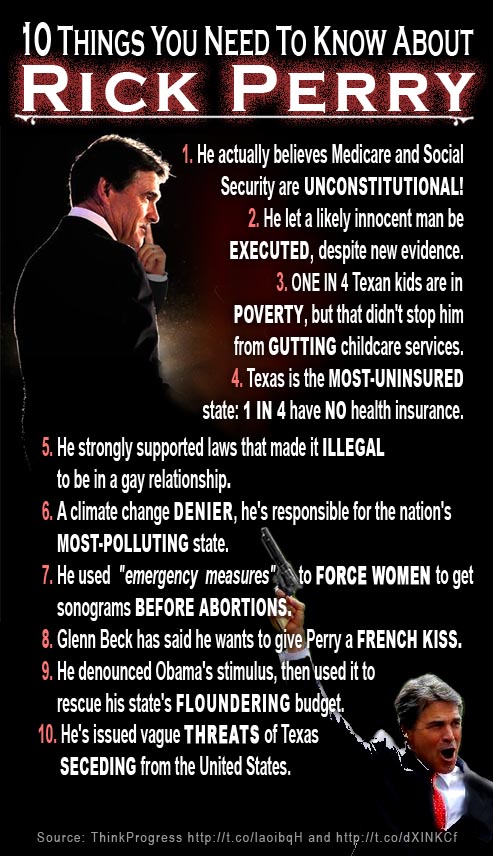 We definitely have the makings of a political/evangelical uprising that could finish off the economic and cultural decline that Bush started. For his campaign announcement speech, Perry was introduced by Erick Erickson, the editor of the uber-conservative RedState, and a CNN contributor, who is notable for calling a Supreme Court Justice a “goat-fucking child molester.” And in his speech Perry reiterated the four principles he intends to pursue if elected:

Sound familiar? That’s the standard GOP recipe for national disaster that got us where we are today. But perhaps the most frightening part of Perry’s platform is his devotion to a radical religious crusade as the means to resolve the country’s problems:

“Fellow Americans, right now, America is in crisis. We have been besieged by financial debt. Some problems are beyond our power to solve. We will gather to pray for a historic breakthrough for our country. There is hope for America. We will find it on our knees.”

That’s all America needs now. A president who would have us all kneel and pray away our problems. Calamity Perry does not have solutions to the serious dilemmas we face. He only has platitudes and scripture and a firm belief that he has been called by God to save America.

[Addendum] Perry has also been implicated in a slush fund scheme to benefit his campaign contributors. Rupert Murdoch’s Wall Street Journal called it Rick Perry’s Crony Capitalism. That conclusion was based on an in-depth investigation by the Dallas Morning News that uncovered Perry’s Tech Fund Aided Firms With Ties To His Donors. Under Perry, taxpayers may not have access to frivolities like health care, education, or food, but they do get to funnel cash into the pockets of Perry’s political patrons. This scandal alone should sink Perry’s aborning campaign. That is, if the national media has the integrity to give it the attention it deserves.