These are difficult times for America as it struggles with both internal and external problems. Russia’s genocidal assault on Ukraine has embroiled the world in an unprovoked and otherwise unnecessary conflict that has impacts far beyond the borders of those countries. Meanwhile, while the numbers decline, the COVID pandemic continues to pose risks for vulnerable communities. And even though employment and wages have increased significantly in the past year, inflation has has taken a bite out of those gains.

Consequently, President Biden’s favorability has suffered despite his having executed almost flawlessly throughout the challenges that his administration is facing. You might think that the adversarial Biden bashers at Fox News would be satisfied just reporting on some of the polls where his numbers have declined. But then, you don’t know Fox News.

The fabulists at Fox are never satisfied with merely disseminating bad news for Democrats when they could be spreading flagrant falsehoods instead. Take, for example, this story that Fox News did on Tuesday about an NBC News poll… 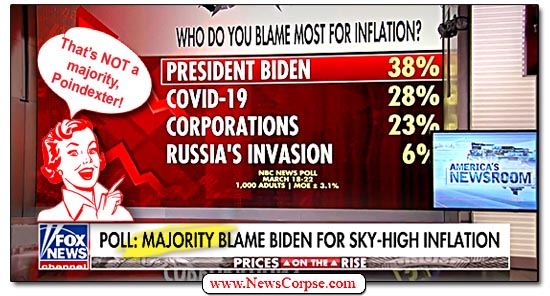 Alert viewers would immediately notice that Fox News apparently doesn’t know what the word “majority” means. What their graphic shows is actually that a plurality – not a majority – of the poll’s respondents blame Biden for inflation. The majority (57%) actually do not blame Biden. They blame other factors, including COVID-19, corporations, and Russia. Which proves that the American people are much smarter than Fox News.

If you were to approach any of those who answered that Biden’s policies were responsible for inflation, and ask them which policies they meant, it’s a safe bet that they couldn’t identify a single one. That’s because the real factors fueling inflation are indeed the pandemic and greedy corporations that are raking in record profits while whining about some higher costs. They just pass those costs on to consumers and use the windfall to buy back their stock, making them even richer.

For its part, Fox News is happy to brazenly mislead their already dimwitted audience. The guest host, Trace Gallagher, introduced the segment saying that…

“A recent poll shows a majority blame President Biden for the ballooning inflation, and not Russia’s invasion which the President has been using as his scapegoat.”

For the record, Biden has correctly cited a number of factors that have contributed to higher inflation, not just the Russian war against Ukraine. More to the point, Gallagher’s intro proves that the “majority” misstatement wasn’t just a sloppy “mistake” by a graphics editor. It was articulated on air by the program’s host. This was obviously an editorial decision that Fox News made to deliberately lie to their audience in order to disparage Biden.

Of Course, that’s standard operating procedure for Fox News. But it’s not often that their glaring dishonesty is exposed in the very graphics they are using to illustrate their lies.

10 thoughts on “Fox News Lies that Poll Shows a ‘Majority’ of Americans Blame Biden for Inflation – It Doesn’t!”