The just ended Supreme Court session produced a number of historically disastrous decisions that are utterly disconnected from constitutional law. They ruled against a woman’s right to reproductive choice. They curbed the Environmental Protection Agency’s authority to regulate deadly carbon emissions. They weakened states’ rights to limit access to guns. They allowed religion to be forced on public school students. 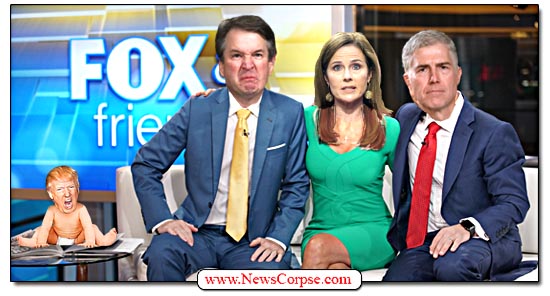 These decisions are an assault on the principles of a free society. They will undoubtedly result in greater harm to millions of Americans, including many who will die due the Court’s radical biases and strict obedience to their extremist ideological dogma.

The rulings also have something in common with each other. They are all identical to the uber-rightist political positions articulated daily on Fox News. Both the decisions, and the faulty “reasoning” used to support them, are straight out of the mouths of Fox’s Ultra-MAGA hosts and guests.

That partisan conformity was recognized by America’s most prominent living humorist, Jon Stewart. “The Supreme Court is now ‘the Fox News of justice,'” Stewart recently observed. He further noted that the rulings emanating from the hard-right faction of this Court have no consistency, saying that “States can’t regulate guns, but they can regulate uteruses.” He continued…

“‘It is a cynical pursuit in the same way that Fox News would come out with ‘we’re fair and balanced’ under the patina of what would be a high-status pursuit to the betterment of society, journalism. They are a cynical political arm.”

Indeed. The conservative justices are no better than the hacks on Fox News who shape their commentaries to fit their prejudices. They are flagrantly constructing a legal foundation that reflects their staunchly right-wing conclusions, rather than the Constitution. Stewart also addressed the Senate confirmation process, saying that…

“When you look at the ridiculous kabuki theater now of justice confirmation, where they can just go out there and just fucking lie, like if this were about debate, then they would’ve understood what perjury meant.”

Stewart is referring to justices Kavanaugh, Gorsuch, and Barrett, who all told the Senate that they would respect judicial precedent and the settled law of cases such as Roe vs Wade. They lied. And now they are on the Court where their opinions are implementing the Fox News agenda. Some examples of the intertwining wingnut justices with Fox include…

The problem with Stewart’s otherwise appropriate observation is that the Donald Trump-appointed justices might regard the connection to Fox News as a compliment. They are not ashamed of their affiliation with the crackpot contingent in the media. To the contrary, they are proud of it. And because of their inherent power to interpret constitutional laws that affect every American, they are even more dangerous to the welfare of the nation than Fox News. Which is really saying something.

2 thoughts on “Jon Stewart Nails It: The Supreme Court is Now the Fox News of Justice”