More dishonesty from Fox Nation. This time the Fox Nationalists posted an item with the provocative headline, “Man Linked to ‘Occupy’ Protest Charged With Attempted Assassination of Obama” 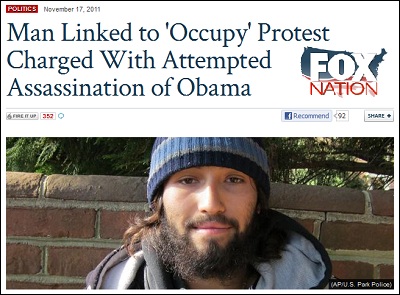 Fox News ran a story with the same deceptive theme. They hosted Michelle Malkin to engage in a discussion that was deliberately designed to smear the Occupiers. During the segment they displayed a picture of the suspect, Oscar Ramiro Ortega-Hernandez, with a caption that said: “‘Occupy’ Shooter.” There was no question mark or other qualifying notation to indicate that this was merely speculation on the part of Fox News.

For the record, the only link between this guy and the Occupy movement is the one invented by Fox. The Washington police have stated unequivocally that they have no evidence that he was affiliated in any with the protesters. Reports that he may have tried to hide in the crowds at the Occupy DC site should not surprise anyone. Any densely populated location would attract somebody trying to elude law enforcement. A football game or an Alzheimer’s Walkathon would serve the same purpose.

What little is known about Ortega-Hernandez would likely lead objective analysts to suspect him of being a Tea Bagger. He is said to be anti-government, hates President Obama, and has a history of mental illness. Could that be Glenn Beck in a fake beard?

5 thoughts on “Fox Nation vs. Reality: On The Occupy Wall Street Assassin”