Today Fox Nation ran an article by Jeffrey Kuhner, a devout birther and columnist for the “Moonie” Washington Times. The article sought to draw a correlation between President Obama and Richard Nixon’s Watergate scandal. 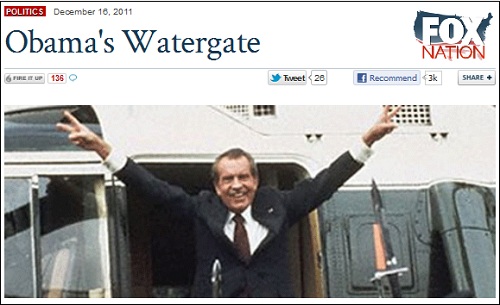 Kuhner’s outrageous theory was that the failed Department of Justice’s “Fast and Furious” initiative, intended to track weapons sold in the U.S. to Mexican drug cartels, was somehow akin to Watergate. But the only thing that this piece illuminates is the profound ignorance that Fox Nation, the Washington Times, and Kuhner have of what happened at the Watergate, and the subsequent cover-up.

The scandal began when Nixon’s henchmen unlawfully broke into the Democratic Party’s campaign offices one night. They were caught and arrested. The White House, recognizing the political fallout if they were implicated, decided to try to payoff the perpetrators and sweep the whole thing under the rug. That effort failed as well, and the administration came crashing down amidst charges of felony burglary, bribery, corruption, and abuse of power.

Kuhner alleges that the Fast and Furious project was “part of an illegal Obama administration operation.” First of all, the operation was initiated during the Bush administration. Secondly, while it may have been ill-advised, it was not illegal. What’s more, although it failed to achieve its intended goals, it was not rooted in corruption or personal gain by any participant. So Kuhner is stretching mightily to associate Fast & Furious with the obvious law-breaking engaged in by Nixon’s “plumbers” and the bribes that later emerged.

Fox News has been peddling this story for weeks. They have been attempting to fabricate an emotional appeal built around allegations that guns sold in the program wound up in the hands of Mexican criminals and resulted in the death of an American Border Patrol Agent. There is, however, no definitive evidence that the agent was shot with one of the guns from the DoJ operation. But even if there were such evidence, do these simple-minded fable spinners at Fox News really believe that if the errant guns from that project had not been lost, that the wealthy kingpins of the drug cartels would not have found other ways to arm themselves? They were well armed before Fast and Furious and they are certainly finding sources for new weapons today. The risks faced by Border Patrol Agents, and all law enforcement officers, have always been, and will always be, a disturbing reality. But they are in no more danger as result of Fast and Furious than they would have been had it been called off by the Bush DoJ that started it.

Unfortunately, in addition to dealing with the failure of the project, and the loss of life, we also have to endure Fox News exploiting the affair for their partisan political ends. That’s a shameful way to undertake their role as a so-called news enterprise, but it is no less than what we expect from Fox.

One thought on “Fox Nation vs. Reality: On Watergate”