Fox Nation is starting off the new year determined to exceed last year’s Cavalcade of Crackpottery. An article posted this morning sports the headline, “Human Carbon Emissions Could Put OFF a Lethal New Ice Age, Say Scientists.” According to the Fox Nationalists, the perpetrators of Global Warming are actually rescuing the planet from a frigid doom. 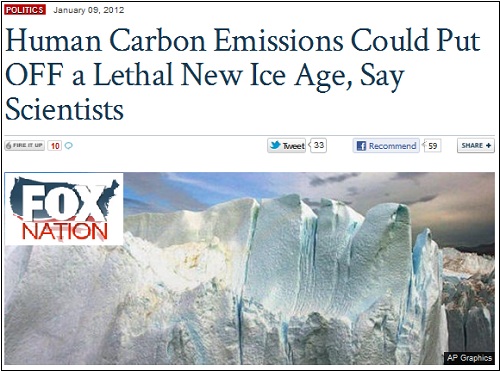 “Levels of CO2 in the atmosphere could actually insulate against a catastrophic ice age which would see glaciers advance over Europe and north America.”

The conclusion drawn by Fox Nation is that rising levels of CO2 are actually beneficial and that we should continue to pollute the atmosphere if we are to survive an icy catastrophe in the year 3512. The only problem with that conclusion is that the scientist they reference for the article, Luke Skinner, has a completely different conclusion. He says that he anticipated this response amongst climate crisis deniers and that they are…

“…missing the point, because where we’re going is not maintaining our currently warm climate but heating it much further, and adding CO2 to a warm climate is very different from adding it to a cold climate.

“The rate of change with CO2 is basically unprecedented, and there are huge consequences if we can’t cope with that.”

Skinner told the BBC that the results of the study point to the sensitivity of the climate system to “quite small changes in CO2, let alone the huge changes that we’ve been responsible for over the last 200 years.” Of course, none of that is included in the Fox Nation article. They flagrantly neglect the obvious point that by the time the presumed ice age begins in 1,500 years, global warming, if unchecked, would have already put half the planet’s current land mass under water.

It is also worth noting that the Fox News climate crisis deniers have long argued that temperatures are not rising and that, even if they were, it could not possibly be due to anything that human beings are doing. But in order to adopt the dishonest interpretation that Fox puts forth here, they would have to reverse that argument and agree that the planet is warming and that humans are responsible for it.

It’s nice to see that Fox is now admitting that man-made global warming is real. Now, if they would just take in the entirety of Skinner’s research, rather than their cherry-picked, out-of-context soundbites, we might actually be able to get together and solve the bigger problems that are facing us.