Over the weekend there was a horrifying display of propaganda broadcast into the homes of unsuspecting football fans. It was disguised as an advertisement and brazenly exploited young children in pursuit of an evil plot to brainwash America with the demonic dogma of a foreign, middle-eastern religious cult. Just watch it…

Ghastly, isn’t it? It was broadcast during the NFL Playoff game between the Denver Broncos and the New England Patriots. It must have so angered God that he declined to bless Broncos QuarterPastor Tim Tebow with another divine victory. And take a look at the response from the righteous folks at Fox Nation: 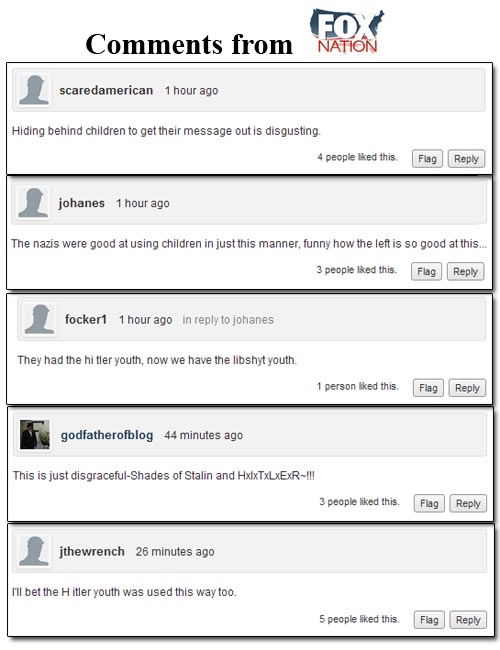 Oh…Wait a minute. Those were actually comments posted in response to a video produced by MoveOn.org in support of the Contract for the American Dream. Here is that video that inspired the Fox Nationalists to slander the MoveOn kids as Nazis.

Personally, I think all these kids are just too darned cute to be real and must be in a pact with Satan. Nevertheless, surely it must be just as bad when a religious organization employs kids to market their spiritual philosophy as it is when another organization does so to advance social and economic justice. No doubt the Fox Nationalists will shortly post an article decrying a “New Low: Focus on the Family Indoctrinating Children,” just as they did when MoveOn released their video. 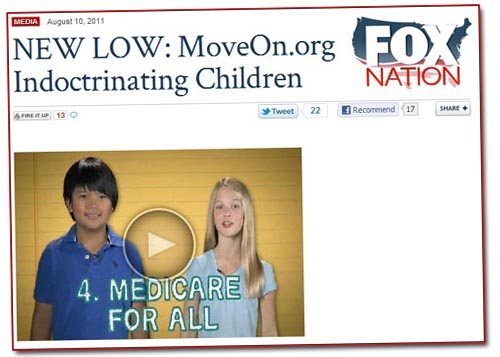 One thought on “Religious Extremists Are Indoctrinating Our Children”