Once again Fox News has twisted the facts of a breaking story beyond all recognition. The headline on their Fox Nation blog reads: S&P Threatens Obama With Another Downgrade. 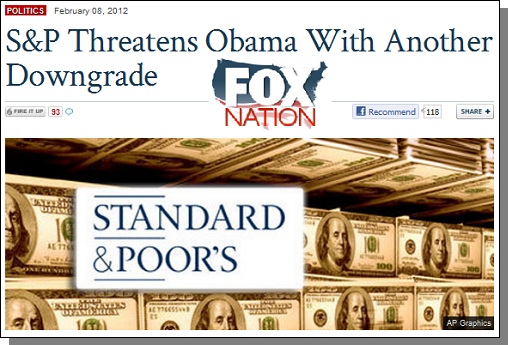 The Fox Nationalists link to an article on Zero Hedge where the original headline says: S&P Threatens US With Another Downgrade. That is an obviously more accurate representation of the opinion expressed by S&P’s John Chambers, who was not threatening Obama at all. The prospect of another credit rating downgrade was directed at the United States, not the White House. Furthermore, its impact will be felt by the nation as a whole, not by the President as an individual.

If anything, the threat was aimed more at Congress, because that is where the budget is drafted, and it is where S&P has previously laid the blame for the downgrade. In their decision last August to drop the U.S. from AAA to AA+, S&P hammered at the disfunctionality of the Tea Party purists in the House who seemed to hunger for an American default:

[T]he downgrade reflects our view that the effectiveness, stability, and predictability of American policymaking and political institutions have weakened at a time of ongoing fiscal and economic challenges […] The political brinksmanship of recent months highlights what we see as America’s governance and policymaking becoming less stable, less effective, and less predictable than what we previously believed. The statutory debt ceiling and the threat of default have become political bargaining chips in the debate over fiscal policy. 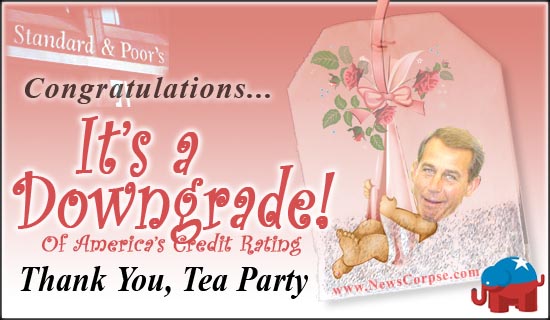 Chambers noted in his latest comments that the “political brinkmanship hasn’t gone away. That simply doesn’t happen in other AAA economies.” Indeed, the same intransigent Tea Party extremists are presently attempting to welch on prior agreements on payroll tax cuts and budget reductions stipulated by the failure of the so-called Super Committee to arrive at a compromise spending bill.

The absurdity of Fox Nation trying to suggest that S&P is threatening Obama makes more sense when you recognize that the mission of Fox News is to disparage the President at every conceivable opportunity. They don’t care whether or not the criticism is factual. The only thing they are concerned with is their obsession with personalizing every negative event as being solely attributable to Obama in particular and Democrats in general. That agenda is not only dishonest, but it is also harmful in that it distracts from the real concerns presented by potential occurrences that will affect the entire nation and every citizen in it.

Fox News doesn’t care about the harm it produces. It only cares about harming Obama and running him out of Washington. Never mind that even if they were successful it wouldn’t change the S&P analysis one bit since it is Congress who is responsible for the budget. The determination of Fox News to harm the country is evident everyday. It is evident in their lamenting of lower unemployment rates, which they dismiss as contrived. And it is evident in their disdain for improvements in American manufacturing in auto and other industries. If there is one thing that is clear about Fox News it is that they revel in bad news for America and they are willing to hurt the country in order to achieve their rightist political goals.

One thought on “Fox Nation vs. Reality: The Obama Downgrade Threat”