Further affirming the desperation of the mavens of the conservative media, a new campaign of slander and innuendo has been launched to tarnish the reputation of Media Matters for America (MMfA), and its founder David Brock. This is reminiscent of a similar campaign orchestrated last year.

This latest barrage of defamation was initiated by Tucker Carlson’s Internet rag, The Daily Caller (TDC). Carlson is a Fox News contributor so it isn’t surprising that Fox immediately jumped aboard this effort with featured segments hosted by Steve Doocy and Megyn Kelly. They also posted the story on their Fox Nation web site, twice. [Update: Carlson later appeared on Bill O’Reilly’s program as well]

The gist of the story, as described by TDC, is that MMfA is manipulating news organizations, coordinating messaging with the White House, and struggling to cope with the “volatile and erratic behavior” of Brock, whom TDC alleges is mentally ill. TDC never reveals from where they got their psychiatric credentials, nor when they had an opportunity to examine and diagnose Brock. Likewise, they never reveal where they got any of the information for the other allegations they make against MMfA.

MMfA was created to document conservative media bias and work to implement reforms that would produce more balanced reporting. Yet, TDC is confused by the fact that MMfA’s research is cited by progressive organizations and media analysts. Why that would confuse them is, in itself, confusing. MMfA makes its materials available for that very purpose. They are providing a service that other interested organizations are free to employ or ignore. They are not manipulating anybody, nor are they forcing anyone to coordinate with them. Additionally, TDC thinks it’s unusual that people and enterprises who share an ideological viewpoint might produce commentaries that have certain similarities. Of course they do. It would be unusual if they didn’t. Does TDC think it’s unusual when John Boehner and Rush Limbaugh say similar things?

TDC’s multipart series on MMfA kicks off with a personal attack on Brock:

“David Brock was smoking a cigarette on the roof of his Washington, D.C. office one day in the late fall of 2010 when his assistant and two bodyguards suddenly appeared and whisked him and his colleague Eric Burns down the stairs. […] The threat he faced while smoking on his roof? ‘Snipers.'”

TDC then asserts that Brock is suffering from severe paranoia and believes that there are right-wing assassins out to get him. But how can Brock be characterized as paranoid when, while he was having a leisurely break, his security team took action to protect him. Perhaps the bodyguards are paranoid, but nothing in this story suggests that Brock is.

For contrast, it should be pointed out that there is no mention by TDC of the reported paranoia of Fox News CEO Roger Ailes. No mention that he was cited as the reason that the NYPD provided police protection for the Fox headquarters at a cost of $500,000 a year to the people of New York. No mention of the obsessive fears described by Tim Dickinson in a Rolling Stone profile:

“Ailes is also deeply paranoid. Convinced that he has personally been targeted by Al Qaeda for assassination, he surrounds himself with an aggressive security detail and is licensed to carry a concealed handgun. […] Murdoch installed Ailes in the corner office on Fox’s second floor at 1211 Avenue of the Americas in Manhattan. The location made Ailes queasy: It was close to the street, and he lived in fear that gay activists would try to attack him in retaliation over his hostility to gay rights. (In 1989, Ailes had broken up a protest of a Rudy Giuliani speech by gay activists, grabbing demonstrator by the throat and shoving him out the door.) Barricading himself behind a massive mahogany desk, Ailes insisted on having ‘bombproof glass’ installed in the windows – even going so far as to personally inspect samples of high-tech plexiglass, as though he were picking out new carpet.”

The TDC article went to great lengths to expose something that ought to have been obvious – that liberal news outlets like DailyKos and Salon would utilize information compiled by MMfA. [Full disclosure: News Corpse has used MMfA materials frequently. It isn’t coordinated. It’s just reliable, documented content] The grunt work of aggregating video and other reporting is appreciated by those who use MMfA materials. Much of it is provided without any editorializing. The right has always been fearful of any entity that would simply record their disinformation, nonsense, and hostility, and then hold them accountable for it. But in condemning MMfA for providing such content to liberal media, they demonstrate their rank hypocrisy. They have yet to criticize NewsBusters or their parent organization, the Media Research Center. However, the former managing editor of Fox News was abundantly grateful:

Brit Hume: I want to say a word, however, of thanks to Brent [Bozell] and the team at the Media Research Center […] for the tremendous amount of material that the Media Research Center provided me for so many years when I was anchoring Special Report, I don’t know what we would’ve done without them. It was a daily buffet of material to work from, and we certainly made tremendous use of it.

Much of the remaining TDC article is a montage of incongruous allegations and lame assumptions. For instance, they cite a meeting between Brock and Obama aide Valerie Jarret as signaling some sort of conspiracy. It was a one-time meeting that occurred over a year and a half ago. They complain that reporters would “get a thousand hostile emails” after exposure on MMfA. But isn’t that sort of accountability the point of an enterprise whose purpose is to unmask media bias?

TDC posted a link to a video of Brock that they labeled an “odd media appearance,” but which seemed pretty restrained and composed to me. They described his aspiration to develop a political action committee to challenge Karl Rove’s Crossroads GPS as “unsettlingly grandiose.” Is that just their standard put-down for anyone who would dare to take on the mighty Rove? And perhaps the most disturbing revelation of all was that “there were very harsh penalties for getting things wrong. And justifiably so.” Imagine that…Brock actually insisted that his staff pay attention to detail and accuracy. What a beast! After all, they are just an organization that monitors the detail and accuracy of other organizations. Who cares if they get some things wrong? They should adopt the attitude of Fox News anchorette Gretchen Carlson:

“When we make a mistake reading the news headlines, whereas at a [broadcast] network you’d probably get fired, instead, we’re like, ‘Eh, we screwed up.’“

TDC says that there will be additional installments of this series throughout the week. I should hope so, because there was nothing in this installment that could be considered newsworthy. However, I expect that the upcoming chapters will be equally devoid of any useful information. So far the only thing that TDC has achieved with this expose is wasting their bandwidth with unsourced, anonymous gossip and personal insults. If it gets any play at all it will be due to the help they got from Carlson’s bosses at Fox News. And the only thing that any of it proves is how dreadfully afraid the conservative propagandists are of Media Matters. It is astonishing how the innocent act of recording their words can set the rightist empire to trembling.

[Update] The Fox Nationalists just posted their third fourth item about Media Matters (although all of them link to the same TDC article). Apparently the other two did not have sufficiently sensationalist headlines to stir the scandal-lust of their perverted readers, so this time they packed in unsubstantiated allegations that Brock is “believed to be” using illegal drugs. 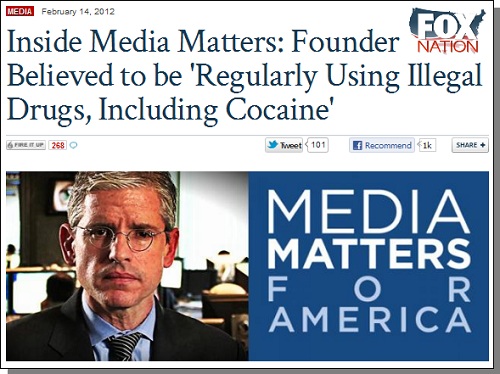 My anonymous sources have confirmed to me that Rupert Murdoch is believed to be funding the New American Nazi Party and patronizing Mistress Helga in swastika-print diapers.