Here we are on the morning after the Super Tuesday primary that may decide the GOP nominee for president of the United States, and what does Fox Nation regard as the most important story of the day, posted atop their web page? 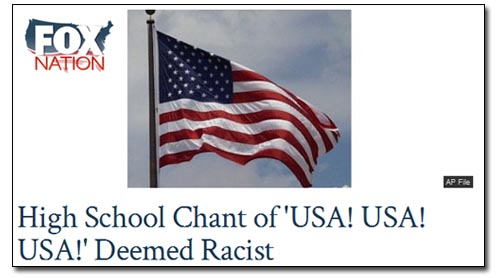 As usual, some context is necessary to grasp the overt prejudice in the story and headline published by the Fox Nationalists.

The incident occurred at a high school basketball game. Ordinarily the jingoistic chanting of “USA! USA! USA!” is something that occurs when an American team is playing a team from another country. But that’s not the case here. This was a Texas high school team (Alamo Heights) playing another Texas high school team (San Antonio Edison). The difference is that the Alamo Heights team was predominantly white, while the opponents from San Antonio were mostly Latino.

The clear inference was that the other team was not American. The only other explanation was that the chanters were cheering for both teams, which was definitely not the case. An Alamo Heights district official even noted that this isn’t the only time this has happened:

“If this chant was commonplace – chanted at their games with other schools — it would not be a problem. It was targeted at a school that is predominantly Hispanic.”

There is no other interpretation of this behavior than racism. Even the district official from Alamo Heights (the white school) recognizes it. But Fox doesn’t. And they leave their readers with the false impression that the school district has engaged in some sort of rabid political correctness and is opposed to national pride.