In my ongoing series “Fox Nation vs. Reality” I have endeavored to expose some of the more brazen departures from truthful reporting that so often make their way onto the pages of the Fox Nation web site. But today the Fox Nationalists have ventured beyond even their typical separation from the facts by posting as their headline story this sensationalistic declaration: White House ‘Panicked’ Over Gas Prices, President Becoming ‘Incoherent’ 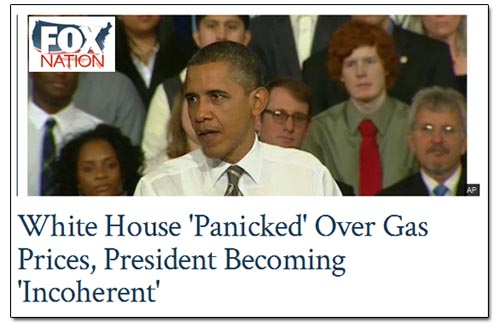 The associated article said nothing about the White House being panicked. It said nothing about the President being incoherent. Despite those words being put in quotes in the headline, they were not referencing any citation by any person. In fact, they were not a part of the story in any respect – not directly, indirectly, insinuated, implied, hypothetical, allegorical, or…well you get the idea. The entire piece consisted of a video of a Fox News report on the presidential campaign, an excerpt of results from a Fox News poll, and one paragraph that briefly abstracted part of the content of the video.

Where the Fox Nation editors got the idea that the president was panicked and incoherent is a mystery. The only explanation is that they are so infected with Obama Derangement Syndrome that they were in the throes of a hallucinatory seizure. Either that or their determination to slander the President is so overpowering that they could not resist the urge to invent derogatory adjectives to attach to his name.

It’s bad enough when the Fox Nationalists post stories with pejorative quotes from the likes of Hannity or Limbaugh as if it were news, but when they don’t even have a source and they still put their insults in quotes, they have crossed a line that could only be acceptable to the most untrustworthy purveyors of schlock journalism – aka Fox News.

Update: The Fox Nationalists edited the article this morning. They swapped out the video for one that consists of a panel discussion with Jonah Goldberg, who made the following statement in response to a question from anchor Bret Baier:

Baier: The president is out almost every other day, it seems, talking about gas prices. Is it a sign that this White House is concerned about this issue? What does it tell us?

Goldberg: I think it tells us they’re in something of a panic over it. We’ve seen his poll numbers drop precipitously. And you can’t prove it, but most people think the gas thing is a major driver of it. And the problem is that he basically beyond doubling down, he’s tripling down on the same stuff he was saying three years ago, and it’s fundamentally incoherent.

So now they have the basis for their quotes – a highly partisan right-winger with an agenda to peddle. However, from the same segment they completely ignored the statements by panelist Kirsten Powers who called it hypocritical:

Powers: This is a real exercise in hypocrisy because when George Bush was being blamed for high prices by Democrats, Republicans were saying the president doesn’t have any control over that and now we have the exact reverse.

Obviously somebody at Fox Nation wasn’t paying attention when they first posted this item. But what’s worse is that the correction includes a clip of Fox’s chief news anchor, citing a Fox News poll, saying that “the majority said the president is to blame for gas prices.” Except that the majority in the Fox poll said exactly the opposite. The majority (52%) said the President is not to blame, and only 40% said that he is. So Fox News compounds their erroneous reporting even as they attempt to correct it.