Let’s face it, Fox News is unabashedly opposed to Barack Obama and everything his administration represents. The network has virtually conceded that it is nothing more than a promotional vehicle for conservative Republican politics and politicians.

Now Fox News has stepped even further across the line of objectivity by taking up the case of a Marine sergeant whose adventures in social media are blatantly disrespectful to his superiors and teeter toward insubordination or worse.

Sergeant Gary Stein is the founder of a Facebook page called “Armed Forces Tea Party.” According to reports from the Associated Press, Stein had been informed that he was in violation of Pentagon policy prohibiting political activities. The policy specifically forbids military personnel from using contemptuous words against senior officials, including the defense secretary or the president. At first Stein cooperated with his commanders by taking down the Facebook page, but he later restored it based on his own conclusion that he was not in violation of any code. As a result, he is now the subject of an administrative action that could result in a discharge.

Stein is adamant that he is innocent of any infraction. he contends that he was exercising his free speech rights by posting messages in which he declared that he would refuse to follow any order issued by the President, his commander-in-chief, that he deemed unlawful.

“I’m completely shocked that this is happening,” Stein said. “I’ve done nothing wrong. I’ve only stated what our oath states that I will defend the constitution and that I will not follow unlawful orders. If that’s a crime, what is America coming to?”

Technically, I agree with Stein on the matter of a soldier’s obligation to refuse to follow an unlawful order. That is a standard set after World War II that resulted in the inadmissibility of the defense that “I was just following orders.” But Stein had better have a damn good basis (and an opinion from a legal expert) before he engages in what might constitute mutiny. Stein had no such basis when he chose to ignore the orders of his commanders or to declare that he would refuse to follow orders from the President if those orders included detaining or disarming U.S. citizens. That overly broad standard would mean that Stein would not act against Adam Gadahn, the American who is presently the media adviser for Al Qaeda.

Stein’s story was broadcast on Fox News’ America Live with Megyn Kelly. Fox News also featured the story on both the Fox News web site and Fox Nation, where Stein has been treated as a hero for standing up to President Obama. However, he has a pretty thin case to make for his patriotism when he posts comments like this: “I say screw Obama. I will not follow orders given by him to me.” That comment has since been deleted and Stein says that he later qualified his comment to reflect that he would only disobey unlawful orders. But you can still find this comment on his Facebook page without qualification: “Obama is the “Domestic Enemy” our oath speaks about.” 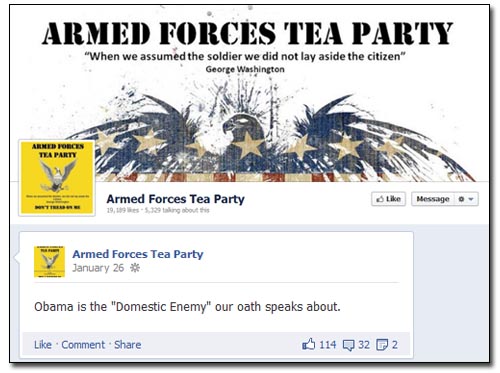 That goes far beyond Stein’s assertion that he was merely stating what the military code says about following unlawful orders. It is an exhibition of overt disloyalty that the military ought not to abide. In fact, it designates the President as an enemy of the state, which would make him a suitable target, in Stein’s warped view, for hostile action or assassination. And that is exactly the view that Fox News, and their audience of pseudo-patriots, are applauding. Disgusting, isn’t it?

[Update] On April 6, a military board recommended that Stein be dismissed from service with “other than an honorable discharge” (i.e. dishonorable).

“The three-member Marine Corps administrative board at Camp Pendleton found that Sgt. Gary Stein had committed misconduct by posting anti-Obama comments on a Facebook page, calling the comments ‘contemptuous.’ […] The final decision on Stein’s status will be made by the commanding general of the Marine Corp Recruit Depot San Diego.”

[Update II] On April 25, 2012, the Marines formally discharged Stein as the commanding general of the base accepted the administrative board’s recommendation for discharge.