The anti-science, faith-based zealots at Fox Nation examined the results of a Gallup poll on global warming and concluded that the headline revelation from the survey was that “42% Of Americans Feel The Media Exaggerates Global Warming.” 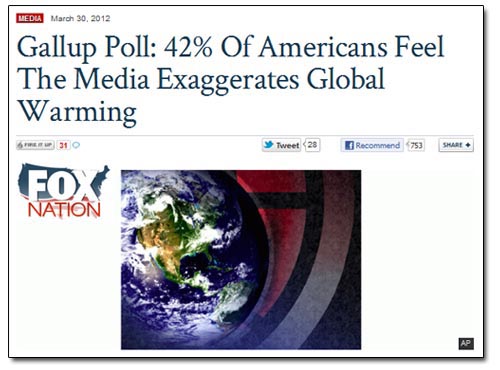 Confident that their readers would never bother to look up the Gallup data themselves, the Fox Nationalists blatantly misrepresented the polls results. A full reading of the survey’s results would have revealed that 55% of respondents regard media coverage of the seriousness of global warming as either correct (24%) or underestimated (31%). That’s a clear majority that is 13 points higher than those who believe that the seriousness is exaggerated.

What’s more, the Gallup poll shows that those who regard the coverage as exaggerated are predominantly Republicans (67%), while a minority of both Independents (42%) and Democrats (20%) share that view. Additionally, a majority (53%) believe that global warming is caused by pollution resulting from human activities, and 58% correctly observe that most scientists affirm the existence of global warming. When asked how much they personally worry about global warming, 55% say a great deal/fair amount, four points higher than last year. And again, those numbers include majorities of Independents and Democrats with Republicans and conservatives bringing in the rear.

No wonder the source to which Fox Nation links to support their article is a trifling right-wing blog called Weasel Zippers, rather than to the Gallup poll itself. That’s consistent with their mission to keep their audience as ill-informed as possible.

It’s actually pretty encouraging that most Americans still recognize the risks association with global warming despite the massive campaign by right-wing media (led by Fox News) to belittle it. But it is nonetheless disheartening that any American buys into Fox’s lies. Every time it snows in Connecticut in the dead of winter, some Fox anchor uses that as evidence that global warming is a hoax, but they never report on significant heatwaves and droughts (as in Texas) or that the planet has been recording the hottest temperatures on record for the past decade.

If it weren’t for the concerted effort on the part of conservative media (and their corporate allies) to distort the truth about this issue, there would be an even bigger majority with rational positions on global warming that aligns with the consensus view of the worldwide scientific community. And then we might even be able to do something to resolve the problem, prevent predictable sickness and death, and preserve the viability of the planet as a habitat for life. But then is that really more important than oil company profits and the economic growth of multinational corporations?

4 thoughts on “Fox Nation vs. Reality: Global Warming And The Media”