A few days ago President Obama delivered a speech in which he reminded his audience that everyone who succeeds in America has done so with the help of other Americans. We are all mutually dependent on the resources and civic projects that keep this country humming. The President made the point that even he was a beneficiary of the social and economic collective advancement that’s historically been a part of our nation’s framework. He noted that “Somebody gave me an education. I wasn’t born with a silver spoon in my mouth. Michelle wasn’t. But somebody gave us a chance.” However, in the past few decades, something changed in our country. As Dylan Ratigan says in his book Greedy Bastards…

“[S]omething has gone wrong in America. For the last few decades, the rising tide has been lifting only the yachts. Almost anywhere you look, if you just open your eyes, you will see ordinary, hardworking people struggling. Not far away you’ll find a few greedy bastards making out like bandits. What defines greedy bastards? It’s not merely that they’re rich. […] Greedy bastards have given up on creating value for others and instead get their money by rigging the game so that they can steal from the rest of us.”

That’s the heart, and what passes for the soul of Mitt Romney, who somehow extracted an interpretation of the President’s words that led to the absurd criticism that, “This is a president more intent on punishing people than he is on building our economy.” However, when even a cursory examination of the facts is made, it’s clear that it is Romney who is The Punisher. His policies, if enacted, will punish a broad spectrum of Americans from almost every possible constituent group. For instance…

1. WOMEN:
Despite telling representatives of Planned Parenthood that he supported Roe v. Wade when he was running for governor of Massachusetts, he now says that he believes that life begins at conception and that the historic Supreme Court ruling should be overturned. And while the health care plan he implemented as governor included coverage for abortions and contraception, he is now fervently opposed to such coverage. He has also expressed his opposition to the Lilly Ledbetter Act that Obama signed in order to assist women seeking equal pay and relief from workplace discrimination.

2. THE POOR:
Earlier this year Romney famously declared that he is “not concerned about the very poor [because] We have a safety net there.” Clearly Romney has never had to avail himself of the services provided to those reliant on the safety net, or he might be a little more concerned. He might also not have developed a tax plan that would further cut taxes for the wealthy while raising them for lower income citizens.

3. WORKERS:
Once again, Romney let his true feeling be known when he gushed that he “like[s] being able to fire people.” That being the case, it is no wonder that he regards unions as impediments to his goals. He blames unions for many of the nation’s economic problems and promised a policy to forbid union preferences in federal contracting beginning on his inauguration day.

4. GAYS AND LESBIANS:
Romney is adamantly opposed to same-sex marriage and open homosexuality in the armed services. This is another position that conflicts his record in Massachusetts where in 1994 he campaigned for a senate seat saying that he would be even an stronger advocate of gay rights than Ted Kennedy.

5. AUTO COMPANIES/EMPLOYEES:
Romney considers Michigan, where his father was once governor, one of his many home states. Nevertheless, he was so against a stimulus package for the auto industry that he publicly stated his preference that they should be allowed to go bankrupt. The stimulus was provided by the Obama administration and today GM has retaken its position as the number one car manufacturer in the world. And that was achieved with no help from Romney who even traveled around the country giving speeches that disparaged the company’s products, particularly the Chevy Volt which now receives high praise from industry experts and consumers.

6. LATINOS:
Romney has staked out an extremist position on immigration that will not endear him to Latinos. He has called Arizona’s SB1070, a law that nearly criminalizes being brown-skinned, “a model for the nation.” Romney opposes the DREAM Act that would establish residency for immigrants who came to the United States as children and then served in the military or completed college. But a Romney administration would expect these, and all immigrants, to self-deport.

7. SENIORS:
If you are 65 years old, or ever expect to be, Romney is intent on making your golden years somewhat less shiny. He advocates raising the retirement age to eligible for Social Security benefits. He supports moving funds into private accounts that would fluctuate with the uncertainties of the stock market. And he has proposed tying increases to the Consumer Price Index rather than the Wage Index, which would significantly undercut the purchasing power of seniors dependent on a fixed income.

8. ANYONE WHO CARES ABOUT CIVIL LIBERTIES:
For anyone concerned about the rights granted by Supreme Court decisions, Romney carries a frighteningly extreme portfolio. He has said that would nominate judges like Roberts, Alito, and Scalia to the bench. But even more disturbing, he recently brought on Robert Bork as his new top legal adviser. Bork was the man behind the “Saturday Night Massacre” where two Justice Department leaders resigned rather than fire the Special Prosecutor investigating Watergate. It was Bork who stayed and carried out Nixon’s orders. Bork also once called the Civil Rights Act of 1964 “a principle of unsurpassed ugliness.”

9. RESIDENTS OF EARTH:
Three words: Drill baby drill. Romney is a staunch advocate of exploiting fossil fuels on land and at sea. He is a critic of off-shore oil bans and a supporter the KeystoneXL pipeline that risks contaminating ground water in order to enrich refineries who intend to ship the oil products overseas. Although he has said that he believes that global warming exists and the it may be caused by human activity, he is opposed to addressing the problem with regulations that he believes would impair economic growth. Because economic growth is more important than having a planet on which to grow.

10. DOGS:
Just ask Seamus, the poor Irish Setter who was forced to ride in a cage on the roof of the family station wagon while on a 600 mile road trip.

Mitt Romney has a resume and an agenda that promises pain for average Americans. He would increase the financial burdens of the poor, reduce the protection of agencies that monitor everything from Wall Street to toxins in foods. He respects only wealth and, consequently, has assembled a program that could be called Trickle-Down on Steroids. Yet he has the audacity to accuse President Obama of wanting to punish people simply because the President’s plan asks billionaires to pay a few percentage points more on their wildly extravagant income.

Romney thinks it’s punishment to return to the tax rates of the 90s when the economy was booming, but he can’t comprehend the punishment of millions of families losing their homes, thousands of students losing their grants, innumerable sick people unable to get necessary treatment, or communities across the nation being exploited by greedy corporations and politicians like Romney. In Romney’s world it is better to protect one American millionaire than a million Americans. It’s the code of the Greedy Bastards. 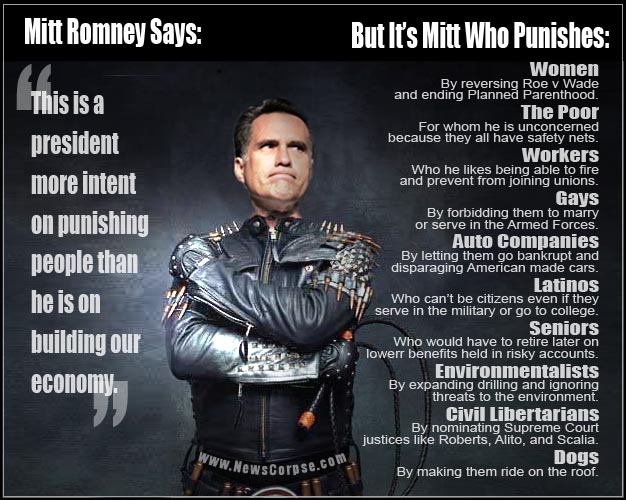