C’mon guys, you’re making this way too easy for me.

This morning Fox Nation posted an item with the headline, “Poll: Americans Not Buying Buffett Rule.” That seems straightforward enough. The poll ought to simply show that a majority of respondents do not believe that raising taxes on millionaires will do any good. And since they are relying on the results of a poll conducted by Fox News, they should be able to support whatever preconceived myth they want to invent. But notice the very first paragraph of the story: 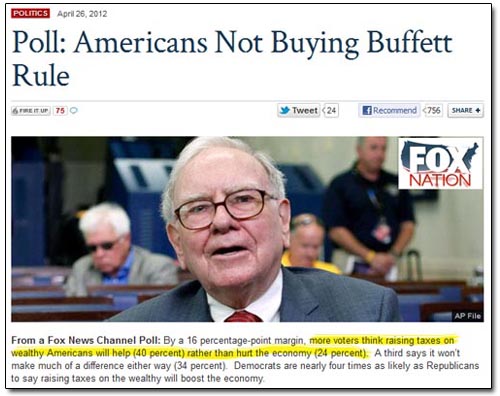 That’s right – the poll by Fox News itself says that “more voters think raising taxes on wealthy Americans will help rather than hurt the economy.” And the margin (16%) isn’t even close. Yet the Fox Nationalists paste a headline atop the article that is outright, diametrically opposed to the truth.

What’s next? A story about ObamaCare saving thousands of lives with a headline that says “ObamaCare Killing Patients In Droves.” Or maybe an article about the end of the Afghan war titled “Army Escalates Actions In Afghanistan.” And I can see the headline on election night if Obama is reelected: “Romney Wins!”

Are these people even trying anymore? Has it really come down to Fox just posting the headline they’d like to see above any random story, even if it says the complete opposite? They must really think their readers are idiots. And since they must know their audience better than anyone else, I will defer to their assessment.

5 thoughts on “Fox Nation vs. Reality: Buying The Buffett Rule”