In their ongoing effort to insure that the Fox News audience is the most ill-informed collection of dimwits on God’s flat Earth, Fox Nation published a story that makes the incredulous claim that “New Research Shows Wind Farms Cause Global Warming.” 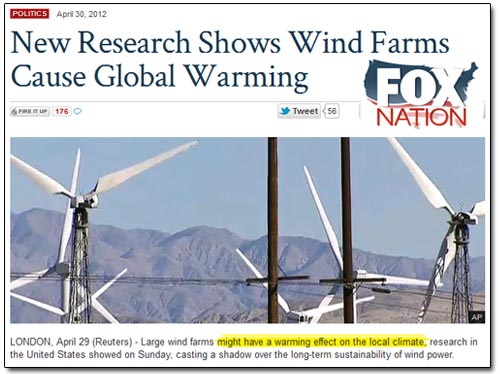 Of course the research referenced shows nothing of the sort. Even the first line of the Reuters article, to which the Fox Nationalists linked, specifically says that the effect the wind farms “might” have is limited to the “local” climate. There is no finding in the research that suggests any global impact.

“[it is very likely that] wind turbines do not create a net warming of the air and instead only re-distribute the air’s heat near the surface, which is fundamentally different from the large-scale warming effect caused by increasing atmospheric concentrations of greenhouse gases.”

This is part of a continuing pattern of conservative media misrepresenting scientific research in order to deceive their audience and promote policies that benefit their wealthy, corporate backers. These right-wing “journalists” never bother to correct the record even when the scientists they misquote insist that their work has been mangled. That’s because reporting the truth is not part of Fox’s mission. Advancing their partisan disinformation is the only reason they are in business.