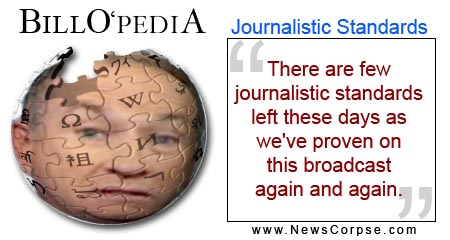 Last week Bill O’Reilly interviewed his Fox News colleague Jesse Watters about a video Watters had produced wherein he ambushed Van Jones at a green energy convention. The video itself was a frivolous exercise that succeeded mainly in demonstrating how easy it was for Jones to make Watters look foolish.

Well, Monday came and went and there was no video. O’Reilly broadcast his Reality Check segment on Tuesday and there was no video. It should come as no surprise that O’Reilly failed to air the video and didn’t even bother to address the fact that he was breaking his promise to do so. The reason for that is simple: There is no video of Jones saying what Watters alleged he said.

The truth is that Jones never said that Republicans “want to poison children.” He responded to accusations that the EPA kills jobs by noting that the EPA actually saves tens of thousands of lives every year by controlling toxic emissions and pollution. Jones suggested that critics be asked “How many American children are you willing to poison per job?” It was a speculative question meant to stimulate discussion about the relative merits of environmental regulation, not an indictment of the GOP as wannabe children poisoners.

This is yet another example of Fox News making irresponsible and dishonest allegations and failing to back them up with evidence. These phony “journalists” have no problem shamelessly making false statements publicly and then simply letting the whole matter drop and hoping their glassy-eyed audience forgets the part where they promised to provide proof. And judging from the non-reaction from the Fox audience, forgetting is something they do willingly.