Today fox News added Mitt Romney to the list of “Derangement” syndromes that have entered the vernacular. That in itself is not particularly noteworthy. The syndrome meme has been gaining popularity and has been attached to virtually every major political figure at one time or another.

What’s of note here is that this decidedly partisan expression was not coined by a Fox News opinion commentator and it did not appear on Fox Nation. It was authored by Chris Stirewalt, the politics editor for Fox News Digital: “Obama Suffers From Early Onset Romney Derangement Syndrome.” 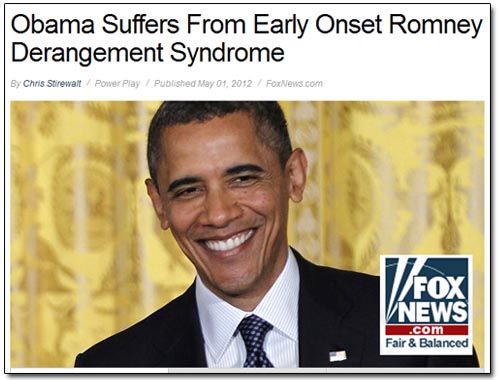 The article addresses the phony controversy stirred up by Fox over whether Obama had politicized the killing of Osama Bin Laden by referencing it in a web video that enumerated some of the President’s accomplishments in office. It would be impossible to draw up such a list without including the Bin Laden episode, but the right wants to forbid the President from getting any credit for his role in accomplishing something his predecessor failed to do for seven years. Here is an excerpt from the article that Fox News considers to be “fair and balanced:”

“[M]aking a nakedly partisan attack surrounding the best military moment in a long time looks grubby and un-presidential. It makes the other things Obama is doing to capitalize on the killing – nuzzling Brian Williams in the Situation Room, etc. – go from eyebrow raising to just plain yucky.”

Does that sound like a hard news treatment of current events? To be clear, Fox News has an opinion section on their web site, but this article was not in it. They presented this brazenly biased screed as actual news. And what’s worse, Fox is completely wrong on the facts of the matter. Romney actually did criticize Obama for saying that he would pursue Bin Laden, even into Pakistan, and that if Pakistan would not act, he would. Romney responded by saying that he disagreed with Obama’s remarks and that he (Romney) would not violate the sovereignty of our Pakistani allies. Therefore, Romney would not have killed Bin Laden under the circumstances that Obama was faced with, despite the fact that he now says he would have done so.

If anyone is politicizing this affair it’s Romney. He is twisting the President’s representation of events and misquoting himself. It’s a classic case of Monday morning Commander-in-Chiefing.