Fox Nation can now add hypersensitivity to its list of psychoses. In their coverage of President Obama’s speech today at the Air Force Academy, the Fox Nationalists spotted an insult aimed at Obama’s predecessor, hidden deeply in the President’s remarks. Can you spot it? 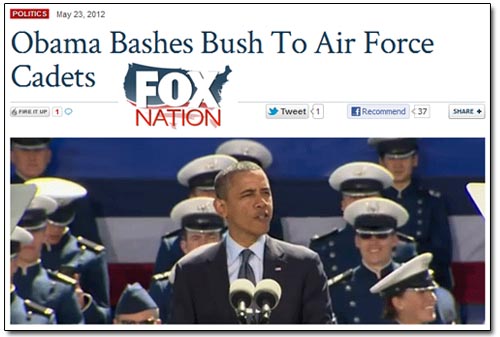 President Obama told Air Force Academy cadets Wednesday America was stronger and more respected around the world than ever before despite impending cuts to the nation’s armed forces. The president delivered the commencement address to over 1,000 graduates at the Air Force Academy in Colorado Springs, Colo. “Around the world there is a new feeling about America,” he told cadets. “There is a new confidence in our leadership.

“Today I think we can say with pride that America is stronger and safer and more respected in the world,” Obama added. He noted the class of 2012 would be the first to “graduate into a world where no Americans are fighting in Iraq and where Usama bin Laden is no longer a threat to our country.”

~ From Fox Nation via the New York Post (hence the snippy reference to “impending cuts”).

So Obama delivers a speech that celebrates the graduating class of the Air Force Academy with a stirring affirmation of America’s greatness. It was a speech that spoke explicitly of American exceptionalism (which right-wingers like to pretend Obama never mentions) and the durability of our governing philosophy and our spirit. It was a speech that every president has given, at one time or another, that pays tribute to an America that is always better than it was, with hope and confidence that it will be better yet in the future.

And in that positive, forward looking message, the Fox Nationalists found an insult to George W. Bush. In case you missed it, let me spell it out. The ultra-irritable little hotheads at Fox think that any proclamation of evolving goodness is a curse directed at what came before. That would mean that any president who has the temerity to suggest that our nation ever improves – that we have the ability to learn and grow – is mercilessly offending his predecessors.

That’s an attitude that defines conservatism. They are intrinsically averse to progress, hence their aversion to progressives. They hate it so much that they can’t even stand the thought that America might find ways to refine and enhance its abundant gifts. To them we must wallow in the sameness of whatever status quo we find ourselves in. Or worse, we must revert to prior eras for which conservatives have blind reverence. And it doesn’t matter to them if that past includes abhorrent intolerances that we have thankfully outgrown.

Whatever you do, do not aspire for more than those who came before you. Because, according to the Fox martinets of virtue, that would be an insult to your predecessors. Stay the same as you are forever. Progress is sin.