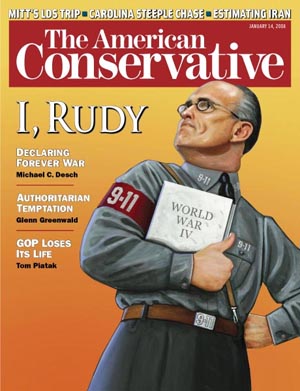 Rudy Giuliani is blazing a trail for himself in Republican circles as he vies for the nomination of his party for president. The former mayor who marched in gay pride parades and supported abortion is now reinventing himself as Mr. Conservative. Unfortunately for him, some conservatives aren’t waiting to welcome him into their ranks. The American Conservative magazine, co-founded by uber-rightist Pat Buchanan, is featuring America’s Player on the cover of its current issue. Their characterization of him as a fascist 9/11 monger isn’t particularly flattering. And neither are the articles accompanying the illustration.

In Declaring Forever War, Michael C. Desch writes that “Giuliani has surrounded himself with advisors who think the Bush Doctrine didn’t go nearly far enough.” Desch is no wild-eyed liberal. He is a professor at the George Bush School of Government at Texas A&M. His article reminds readers of Giuliani’s national security failures as mayor such as:

“…his decision to locate the city’s counterterrorism center in the World Trade Center, which had already been the target of an al-Qaeda terrorist attack in 1993; his failure to integrate the fire and police communications systems; his penchant for surrounding himself with sketchy characters like Police Commissioner Bernard Kerik […] He dropped out of the blue-ribbon Baker-Hamilton Iraq Study Group because it cut into his paid speechmaking.”

Tom Piatak is the author of GOP Loses Its Life. Piatak warns that a Giuliani victory would spell defeat for the social conservatives that have propped up Republicans since the Reagan years:

“If Giuliani becomes the party’s standard-bearer and is then elected, the informal prohibition against pro-choice candidates within the GOP will be shattered, and the power of social conservatives within the party will inevitably decline.”

Surprisingly, Glenn Greenwald, a well-respected progressive, was accorded the space to opine that “…it is hard to imagine a more toxic combination than Rudy Giuliani and the Oval Office.” His column, Authoritarian Temptation, is a frightening account of how Giuliani’s dictatorial style would translate should he ascend to a White House that has been altered by eight years of Bush era precendents:

“Giuliani, when he was merely in charge of New York’s garbage collection, zoning rules, and a municipal police force, developed a reputation as a power-hungry, dissent-intolerant authoritarian, obsessed with secrecy and expanding his own power.”

The fact that a magazine called American Conservative is taking shots at the Republican front-runner is worthy of notice. But even more noteworthy is the theme that Giuliani is viewed by conservatives as a tyrant in the making. This is consistent with the conclusions of Rachel Morris’ Washington Monthly article, Rudy Awakening, that claims that “As president, Giuliani would grab even more executive power than Bush and Cheney.” It is also consistent with Giuliani’s own perverse vision of freedom:

Freedom is about submission. And Orwell is spinning in his grave.