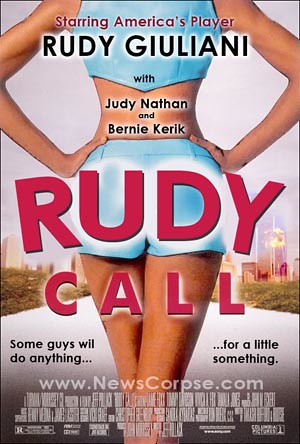 Last month The Politico published a story that escalated into one of the sleaziest scandals of the current campaign season. The story revealed that Rudy Giuliani had been secretly slipping off to the Hamptons with his mistress, Judy Nathan. There were also allegations that the costs of those trysts were improperly charged to obscure city offices.

This morning, the New York Times weighed in with its own account of Rudy’s accounting. The Times seems to conclude that it was unlikely that there was any mischief in Rudy’s travel expenses. [Link to graphic scan of the article]

This quasi-revelation has set off a mini-storm of rash exclamations of vindication and denunciations of the “liberal” media for their unscrupulous attacks on America’s Player, er…Mayor. Web sites like the PowerLine Blog and Townhall are shocked – shocked I say – at the mistreatment Giuliani has suffered.

There’s only one problem: Giuliani has not been vindicated at all. The only thing the Times has uncovered is that the majority of the funds spent on Rudy and Judy’s holidays were charged to the Mayor’s expense account. How exactly does that excuse him from spending city money on seaside sex romps? The Times doesn’t even rule out the possibility that some of the expenses were indeed charged to agencies that regulate lofts and assist the disabled. The article even admits that up to $40,000 is entirely unaccounted for.

Setting aside the fact that Giuliani is still guilty of misusing city funds, his apologists are conveniently forgetting the moral component of this story. Let me remind them: Rudy Giuliani was cheating on his wife. In the Republican Party that is probably a more heinous crime than robbing the city treasury.

Giuliani is not entitled to his reputation back (such as it was) because he is still culpable for making his constituents finance his romances. And he is not entitled to any polling points back because he lost them due to his slack morals, which are still in evidence. And hacks like Chris Matthews ought to think things through before making bigger asses of themselves than they were to begin with.