John Nolte at Breitbart News has so completely given up the pretense of having anything coherent to say that he has begun prefacing his columns with excuses for why they fail to make any point. Here is how he begins his latest lame assault on his favorite target, Jon Stewart:

As a credentialed Stewart apologist, I would like to point out that I am about to “crybaby” over Nolte’s analysis, not because it’s what I do, but because he is such a dumbfuck of an analyst.

Nolte works overtime to be as obnoxious as possible as he seeks to disparage Stewart’s ratings. The absurd angle he tackles is that there is some correlation between Stewart’s late night satirical Daily Show and the puerile Fox News afternoon blabfest “The Five.” For those who haven’t seen it, it features four frothing far-right wingnuts and one impotent, and apparently intoxicated, Fox-style democrat.

After asserting that Stewart is not intellectually honest, and that Stephen Colbert is not funny (and Greg Gutfeld is?), Nolte leaps into his ratings analysis saying that…

“The Five” once again won the viewership battle with the two clowns we are assured are some kind of American phenoms. Gutfeld and company drew a total of 1.478 million viewers, while Stewart and Colbert drew 1.462 and 1.217 respectively.

First of all, anyone who knows anything about television knows that comparing the raw audience totals of two completely different dayparts is meaningless. But Nolte’s faulty reporting extends far beyond that basic fact. He revels victoriously in declaring that The Five won a battle that never took place. But he bases his conclusion on a single, unrepresentative day. So even if you want to make this pointless comparison, it would be more honest to note that the Daily Show regularly posts higher numbers than The Five. In fact, on the days just before, and just after, the day that Breitbrat Nolte cherry-picked, the Daily Show “won the viewership battle” against the five clowns on Fox. 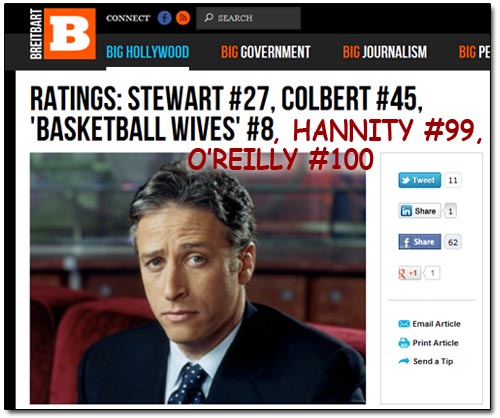 A more honest comparison would be between the Daily Show and the O’Reilly Factor with which it competes head-to-head (although the Factor is a repeat). That’s a contest that Stewart also wins on a regular basis. The Daily Show generally places in the top twenty-five cable programs. But even O’Reilly’s first run broadcast barely squeaks into the top 100.

This is further evidence of Nolte’s proclivity for lying to his readers, a habit he surely picked up from his pseudo-saintly mentor, Andrew Breitbart. Nolte has been viscerally obsessed with bashing Stewart for quite a while, and in every instance he utterly fails to make a coherent argument. But you have to admire his tenacity in persevering despite falling on his face so brutally and frequently.

4 thoughts on “Not So Breitbart: The Case Of Jon Stewart’s Crybaby Apologists”