Today is the 68th anniversary of D-Day, the day that commemorates the Allied forces’ invasion of Normandy in 1944. Mitt Romney has no scheduled appearances on his calendar to mark the occasion. Instead, he solicited donations from wealthy Republicans at private fundraisers in San Antonio and Houston.

Perhaps Romney’s reticence to bring attention to this anniversary has something to do with the fact that his personal history with regard to military service is an embarrassing jumble of hypocrisy, dishonesty, and irresponsibility. 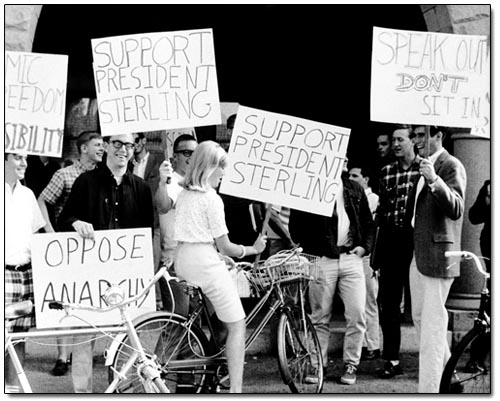 In 1966, Romney was a vocal proponent of the Vietnam war. At Stanford University he attended rallies in support of the conflict and engaged in counter-protests against peace activists. Nevertheless, Romney was content to let other young men risk their lives for their country while he attended school and went to France on behalf of his Mormon church. In 2007, Romney had the gall to tell the Boston Globe that…

“I was supportive of my country. I longed in many respects to actually be in Vietnam and be representing our country there, and in some ways it was frustrating not to feel like I was there as part of the troops that were fighting in Vietnam.”

However, Romney’s alleged frustration was contradicted by his remarks to the Boston Herald in 1994 when he admitted that…

“I was not planning on signing up for the military. […] It was not my desire to go off and serve in Vietnam, but nor did I take any actions to remove myself from the pool of young men who were eligible for the draft.”

So the Romney of 2007 was revealed to be a liar by the Romney of 1994. But that’s not all. The Romney of 1994 was also a liar because he did, in fact, remove himself from the draft for many years with deferments for both college and Mormon missionary work. And Romney’s lack of the character and courage to live by the principles he professed has rubbed off on his five sons, who were all old enough to serve in Afghanistan and/or Iraq, but who declined to enlist. In a display of utterly revolting elitism and ego, Romney defended them saying that “one of the ways my sons are showing support for our nation is helping to get me elected.”

So on this anniversary of D-Day, draft dodger Romney chooses to forgo a formal remembrance in favor of attending a flurry of fundraisers. And how does Fox News report this state of affairs? 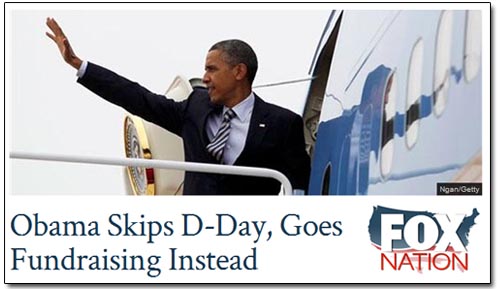 That’s right. It’s all about Obama. And even though Romney skipped D-Day and went fundraising instead, there is no mention of that by Fox. They do however, say that “Obama’s failure to mark D-Day in any significant way is both a shame and a political mistake.” Therefore, it ought to be equally shameful for Romney. At least Obama never evaded military service at a time of war, as did Romney and his sons. It is also notable, in a disturbing way, that the Fox Nationalists took the extra step to complain about the political fallout from not commemorating this anniversary. That is really all they think about. Politics is far more important to them than principle. Had Obama held a D-Day event, the response from Fox would undoubtedly have been that he was exploiting it for political gain and using the troops for a photo-op.

Fox News can be relied upon for only one thing: Strictly one-side, partisan propaganda for the benefit of Republicans and the detriment of Democrats. Roger Ailes works for the RNC, or perhaps vice versa. It’s hard to tell.

For the record, both Obama and Romney tweeted memorials to D-Day participants and survivors.

4 thoughts on “THE VETTING: Mitt Romney’s Shameful Record Of Military Cowardice And Hypocrisy”