It’s been two years since ACORN closed up shop after being falsely accused of voter fraud. But right-wing obsessives refuse to abandon their neuroses once they latch onto them. Never mind the fact that ACORN was exonerated by numerous independent investigations and that the only criminal conviction to result from the harassment was that of James O’Keefe, who produced the dishonestly edited videos that slandered ACORN’s reputation.

Fox Nation, nevertheless, persists in fear mongering about the defunct organization as if it had zombie-like powers of reanimation. Yesterday they featured an article that sought to renew the dread that conservatives still harbor in their hearts for an enterprise that mainly helped people to participate in their democracy and guided them through complex federal mortgage assistance programs. 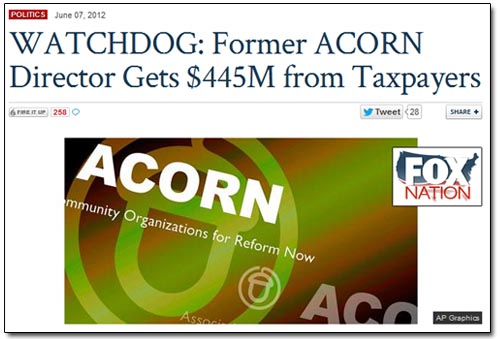 The article relied on a report from the conservative Judicial Watch, who alleged that a former ACORN director was the recipient of federal funds for an Illinois program that helps struggling homeowners make their mortgage payments. It refers to ACORN as “scandal-plagued” and a “corrupt leftist community group.” Of course, neither of those assertions are true and both Fox Nation and Judicial Watch know it.

The problem, as explained by Judicial Watch, is that a “sub-component” of the Illinois Housing Development Authority received a federal grant, and that a director of the program, Joe McGavin, had performed the same role at ACORN. Which simply means that he has experience with helping people with federal assistance and is, therefore, well qualified for his job. But to the Fox Nationalists it means that he is a “suspect candidate,” despite never having been associated with any impropriety.

Meahwhile, at Mitt Romney’s campaign, someone with an actual record of dirty dealings has been added to the team. According to Lee Fang at the Republic Report, Nathan Sproul is “a political consultant with a long history of destroying Democratic voter registration forms and manipulating ballot initiatives.” With a new company name, Lincoln Strategies, Sproul is on the Romney payroll presumably to engage in activities similar to these:

Fox News and their conservative comrades have been hyperventilating about voter fraud for months, although they have never been able to cite actual examples of it. But they continue to raise it as an issue in order to push legislation that has the purpose of disenfranchising legitimate voters who just happen to lean Democratic.

The controversy surrounding ACORN involved allegations of phony names on voter registration applications. However, it was ACORN who alerted officials to the presence of those improper forms and, in any event, they could not, and did not, result in any fraudulent voting. In fact, ACORN itself was the victim of that activity because they were paying registration gatherers per form and the gatherers were falsifying them in order to earn more money. It did not serve any purpose of ACORN to submit forms that did represent actual voters.

On the other hand, Sproul’s corruption had the effect of preventing Democrats from being able to exercise their right to vote by deceiving them into believing that they were registered. But when they got to the polls they discovered that their registrations were never submitted.

And the man responsible for that is now a consultant to Mitt Romney’s campaign. Where is the story on that by Fox News?