Sarah Palin’s Friday appearance on Sean Hannity may have produced the funniest moment of the year. In response to a question about how Congress and Mitt Romney should deal with the Supreme Court’s ruling that ObamaCare is constitutional, Palin took a bit of a detour:

Hannity: Politically speaking, how should Congress deal with this, and how should the Romney campaign deal with it if you were to give advice?
Palin: Well, first off, Nancy Pelosi is a dingbat. And she is the perfect spokesperson for this whole agenda of the far-left running the Democrat Party.

Really? A former Miss America runner-up who quit her job as governor mid-term, failed at both presidential politics and reality TV, is calling the first woman Speaker of the U.S. House of Representatives a dingbat? That’s a little bit like Charles Manson calling Mother Theresa a mentally deranged butcher. 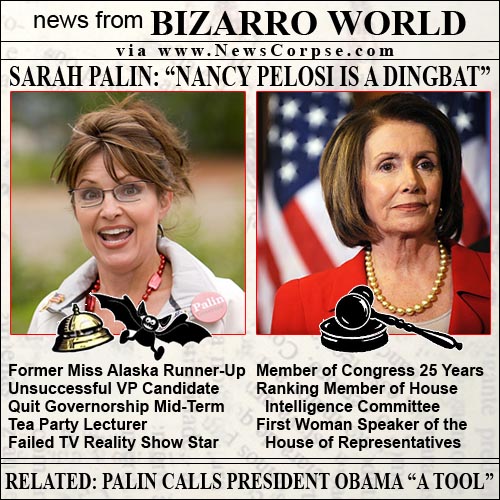 And if that weren’t bad enough, Palin also made a disparaging, phallus-related insult directed at President Obama:

“About the 15% of Americans who aren’t paying taxes and are feeding from President Obama’s hands, perhaps they will vote for such a tool.”

I’m not sure where Palin is getting that 15% number, considering that the latest national polls show Obama well ahead of Romney, and the state-by-state electoral college surveys put Obama just shy of victory. But even more disturbing than her made up statistics, and her profane insults, is her characterization of America’s poor as akin to animals “feeding” out of the President’s hands. That’s pretty much how she and the Tea Party/GOP view the less fortunate in our society. And paraphrasing Palin: She is the perfect spokesperson for this whole agenda of the far-right running the Republic Party. And in this interview with Hannity she sounds like she’s … er … medicated. Which may explain her endorsement of radio wingnut Mark Levin for vice-president.