Fox News has long been a source of blatant dishonesty and partisan propaganda. Most conscious observers are aware that much of what is broadcast on Fox is tainted and unreliable. That accounts for why so many independent surveys show that Fox News viewers are significantly less informed and/or misinformed, than consumers of other news media. Some studies even show that Fox News viewers know less about news events than people who watch no news at all.

But now Fox News has taken a step over the edge into pure Wackoland by linking to a known conspiracy theorist on their Fox Nation web site. 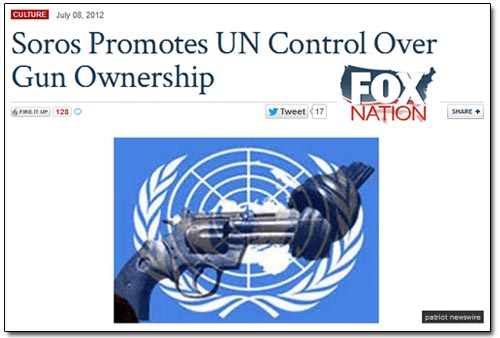 The article on Fox Nation, headlined “Soros Promotes UN Control Over Gun Ownership,” links directly to the Infowars web site run by Alex Jones. Jones is a noted proponent of some wildly off-kilter (and debunked) notions including FEMA-run concentration camps and 9/11 Trutherism. His imagination is boundless and he has provided the raw material for other looney fabulists like Glenn Beck. In fact, Jones accuses Beck of ripping off most of his material, such as the delusional fear mongering of a global caliphate engineered by a cabal of radical Muslims and western socialist atheists.

It’s not surprising to see the Fox Nationalists glom onto this nonsense because this single fable hits on three of the conservative community’s favorite phobias: George Soros; the United Nations; and federal agents coming for their guns. And in every case there is not even a sliver of reality to their nightmarish ravings.

First of all, the core issue centers on a United Nations initiative to address the proliferation of international “illegal” arms trading. There is nothing in the proposal that would infringe on the rights of any nation to set their own standards for gun ownership. The actual resolution explicitly states that countries will “exclusively” maintain the right within their borders to, “regulate internal transfers of arms and national ownership, including through national constitutional protections on private ownerships.“

Secondly, George Soros has nothing whatsoever to do with the UN’s activities in this matter. The only association that Jones/Fox News can assert is that the media watchdog group Media Matters has written about the NRA’s obsession with this issue and Fox’s frequent promotion of that viewpoint. Jones writes that…

“George Soros is financing the fight to give the United Nations control of your guns.

“Through his Media Matters organization, Soros is dumping pro-UN gun control propaganda into the mainstream media to coincide with the United Nations Conference on the Arms Trade Treaty”

Soros has contributed to Media Matters and therefore, according to the conspiracy theorists, Soros is exerting his omnipotent control over every charitable organization to which he has donated. Since Soros has given away billions of dollars to hundreds of organizations, he must be busier than God as he enforces his will on a defenseless world. Never mind that there has been no “dumping” of “pro-UN gun control propaganda.” All that Media Matters has done is to respond to the pro-NRA propaganda that Fox News has been disseminating.

Finally, if there is any conspiracy to be unveiled, it is the one engineered by Fox News to advance the agenda of the NRA. The NRA’s CEO, Wayne LaPierre, is a fixture on the Fox network, and his commentaries are never challenged by guests with opposing views, and certainly not by Fox hosts. Fox permits LaPierre to express his irrational belief that Obama is determined to confiscate all of the guns in America. His proof of that is that Obama is trying to lure us all into a sense of false security by doing nothing to inhibit gun ownership. It’s a demented logic that argues that the more Obama refrains from any gun control, the more his gun control aspirations are revealed.

That’s the sort of absurdity that makes for the most entertaining, albeit dangerous, conspiracy theorism. And it’s the sort of thing that has made Alex Jones a leading figure amongst conspiracy theorists. The fact that Fox has now joined up with Jones says a lot about the direction that Fox is heading during this election year. Apparently the lunacy and lies generated by the Fox News regulars is not sufficient for the current situation, so they have called in reinforcements from the masters of mayhem at Jones & Company. Just when you thought that the credibility of Fox News couldn’t get any lower.

4 thoughts on “Fox News Crosses Over Into Conspiracy Theory Territory”