The issue of immigration is one that the Fox Nationalists relish in demogoguing. They publish numerous stories that are openly racist, as has been thoroughly documented. Here’s just such a story that was designed to inflame prejudice with its utterly dishonest skewing of the facts: 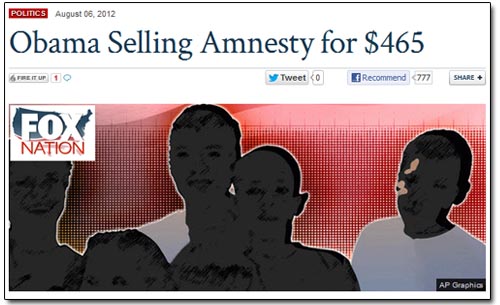 The headline composed by the mental deficients at Fox Nation is wholly untrue. Not only is amnesty not a part of the administration’s program, nothing in it is for sale.

In truth. President Obama directed the Department of Homeland Security to exercise prosecutorial discretion so that innocent children who were brought to this country by undocumented parents are not unduly punished while a more comprehensive solution is negotiated with Congress. The program does not provide amnesty. The fee to apply for this program is intended to offset costs, but can be waived on a case by case basis for applicants unable to pay.

None of those facts stopped Fox from deliberately misrepresenting the matter in way that leads their dimwitted audience to presume that the administration is peddling citizenship to foreigners who come here to steal our jobs. It appears that Fox picked up the story from the juveniles at Breitbart News where John Nolte published an article that implied that Obama’s goal is to mint new voters. Never mind that the immigrants partaking of this program will not have voting rights because they will not be citizens.

Nolte also made a point of adding a note at the end of his column complaining that the author of the article he referenced at ABC News didn’t use the derogatory adjective “illegal” to refer to the program’s potential participants. Apparently Nolte gets upset when people are not sufficiently racist for him.