OK, just about anyone with a functioning brain already knows that Fox News is a biased player working on behalf of the GOP. But their analysis of financial matters and stock market activity is not just biased, but astonishingly stupid. Yesterday on Fox Nation they posted this “news” item: Romney Rally? Stocks Close Higher One Day After Debate. 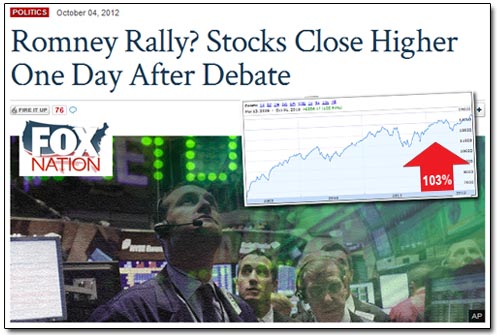 Any time someone makes projections based on a single day of activity it is regarded by professionals as naivete and/or ignorance. So it goes without saying that Fox did just that. On the Fox Business Network, Stuart Varney dropped this mind-numbing stupidity: “Some will say this is a Romney Rally.” And Fox’s Lou Dobbs said “This is the beginning of what will be an even bigger Romney rally as the days unfold.”

Of course, any credible economist knows that market activity is based on a variety of financial data. Yesterday there was an abundance of factors to which the market’s movement could be attributed, including better than expected economic data and the European Central Bank’s freeze on interest rates at 0.75 percent.

Fox has a long history of making idiotic assessments of the stock market. In May of 2009, Brenda Buttner gushed, “Call it a tea party rally. Wall Street’s sure partying, up six weeks in a row.” In September of 2011, Fox Nation reported “Stocks Tumble Worldwide After Obama Speech.” Then in June of 2012, they fantasized that “Stock Market Drops After Obamacare Upheld.”

This tendency of the right to misinterpret all market activity as being the result of Obama (if stocks go down) or some conservative (if stocks go up), extends all the way back to Rush Limbaugh’s nutty commentary on February 8,2009, a mere two weeks after Obama’s inauguration, when he said “The Obama recession is in full swing, ladies and gentlemen. Stocks are dying, which is a precursor of things to come.” Since then stocks have died to the tune of doubling from about 6,600 to over 13,500. Nice call, Rush.

Even Mitt Romney got into it a few days ago saying that “If it looks like I’m going to win, the markets will be happy. If it looks like the president’s going to win, the markets should not be terribly happy. […] Without actually doing anything, we’ll actually get a boost in the economy.” Romney, who considers himself an expert in finance, thinks the markets will advance by doing nothing. His magical name alone will rescue the economy.

What they commonly miss at Fox is that markets traditionally perform better under Democratic administrations than Republicans. And note that that link is to an article on the Fox Business Channel’s web site.

The one lesson that people can take away from this display of ignorance, is that anyone who relies on Fox News for economic advice deserves the economic ruin they suffer.