OK, so the New York Post is a puerile, dishonest, sensationalist rag. But how on earth could anyone have approved this cartoon for publication? 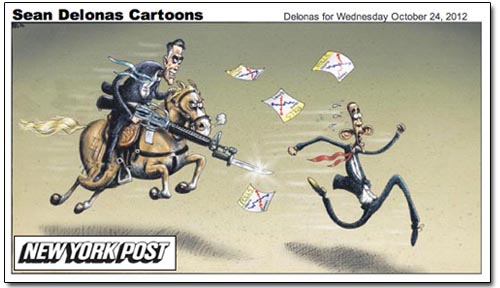 You might think that a cartoon depicting President Obama as the bug-eyed prey fleeing fearfully from a stallion-mounted Romney, who is armed to the teeth, would have given a major metropolitan newspaper editor pause. You would be wrong, particularly if the newspaper is owned by Rupert Murdoch, an ultra-conservative propagandist who will do anything to manipulate an election.

The racist overtones of that cartoon should have been noticeable to anyone who even glanced at it. It practically shouts recollections of slave owners chasing runaway slaves. And even setting aside that repulsive message, the cartoon presents a wholly unsavory theme of violence directed the President.

What could have possessed the editors of the New York Post to publish this offensive garbage? And why hasn’t it stirred more of reaction from the public? If this were an isolated incident it would be bad enough, but three years ago a similarly themed cartoon made it into the pages of the Post: 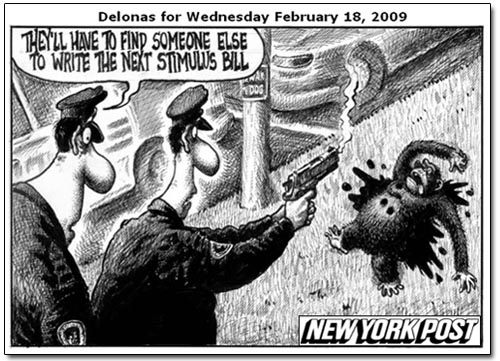 And by the way, it was the same cartoonist, Sean Delonas, who did both of these racist, pro-assassination, pictorial diatribes. It is just inconceivable that this sort of thing is considered appropriate and that a paper like the Post can get away with it. There ought to be consequences and, hopefully, the people of New York will impose them.