For years Fox News has been fear mongering about voter fraud activities that are almost non-existent. Despite their fixation on the subject, they have failed to identify any significant violations in sufficient volume to impact election outcomes. Most of their examples involved registration irregularities that could never have resulted in unlawful votes.

Today Fox News reported on an actual case of attempted voter fraud. However, as usual, it was not a credible attempt that had any real prospects for success. The attempt was thwarted by routine checks and balances and the culprit was arrested. But Fox’s reporting was somewhat incomplete. 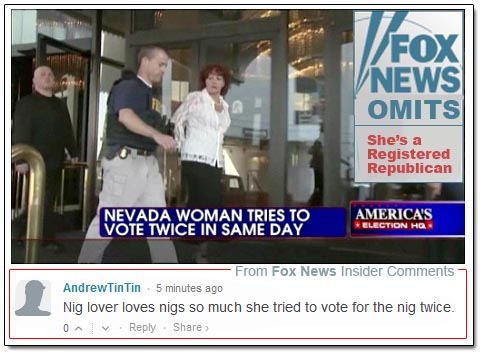 That’s right. As reported in the Las Vegas Sun, the culprit is a registered Republican. It was not merely an oversight for Fox to neglect to identify the party affiliation of this fraudulent voter. It is a part of their mission to associate such activity with Democrats. When they reported about ACORN (who were never found to have committed any crime) Fox meticulously noted their association with Democrats and progressive issues. But that attention to detail subsides when the crime is committed by a Republican. And the result of that bias is evident in the comments that can be found on Fox’s web site.

Fox probably regards this as an example of their successful editorial policies. They must be so proud that their audience exhibits such open hostility and racism, not to mention ignorance. And the ignorance is entirely credited to Fox. How can those poor, unsuspecting racists be expected to know that the objects of their insults are Republicans if Fox doesn’t tell them?