Fox News is continuing to show weakness in its primetime schedule in the wake of President Obama’s reelection. In the eight days since election day MSNBC’s average audience for the key 25-54 year old demographic drew about 8% more viewers than Fox. [Source: TVNewser, weekday Nielsen ratings from 11/7-11/16] 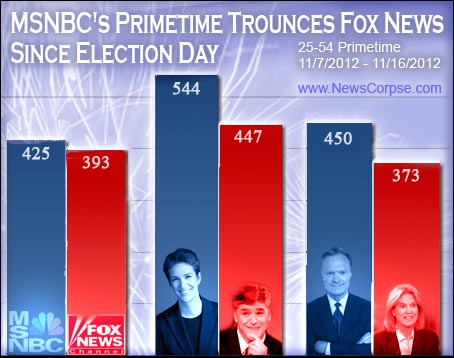 Particularly impressive were the results of the two powerhouse programs on the MSNBC lineup: Rachel Maddow and Lawrence O’Donnell. Maddow won seven of the eight days against her Fox competition, Sean Hannity. For the 8-day run Maddow beat Hannity by 18% and her 544k average was second to only Bill O’Reilly in all of cable news. O’Donnell won all eight days against Fox’s Greta Van Susteren. His margin of victory over Van Susteren was 17% for the eight days.

This can no longer be considered a temporary blip on the ratings scales. With two weeks having elapsed, the MSNBC programs are showing steady strength against competition that was once thought insurmountable. Only Bill O’Reilly is holding his top position for Fox in primetime. This may indicate that Sean Hannity is wearing thin with viewers who are likely disappointed with his overly confident (and harebrained) assurances that all the polls were wrong and that Mitt Romney would emerge victorious.

Hannity is perhaps the most stridently partisan host on the Fox News network and frequently augments his analysis with that of the pundit world’s most notorious nutcase, Dick Morris. As for Van Susteren, she never had the cult-like following of her Fox comrades, but she has been closely associated with her good friend (and client of her husband), Sarah Palin. That association may also have become a drag on the ratings of her show. Hannity has been with Fox since its launch and is still a top-rated radio talker. Van Susteren, on the other hand, had better start to show some improvement or her time slot will go to daytimer Megyn Kelly, a Roger Ailes favorite whose contract is expiring next year and likely wants to move to primetime.

MSNBC has an opportunity here to expand on the progress they have made in the past two weeks. They need a stronger lead-in to the primetime block. Ed Schultz has been doing OK, but he has not kept up with his colleagues. It might be a good idea to move both Maddow and O’Donnell up one hour, find an edgy, provocative host(s) for the 10pm slot (Harry Shearer & Co.?), and give Schultz the Hardball rerun at 7pm (Harderball?). But one thing is for sure, Fox will not be sitting this out. If MSNBC doesn’t build on their momentum, Fox will dial up the heat and retake the lead they’ve had for the past decade. Hopefully MSNBC recognizes the short window they have to make these gains permanent and jump through it.