Thom Hartmann had an enlightening segment last week (video below) that delved into the delusional Psycho-Chicken Littles who are convinced that the United Nations is plotting to take over the world and make slaves of us all. The alleged UN conspiracy centers around an environmental and economic sustainability program called Agenda 21. It is an entirely voluntary set of proposals that member nations can reference for solutions to ongoing problems in their own countries. It imposes nothing on anyone, and the solutions are well researched approaches to serious issues that face our planet.

Agenda 21 is also the title of a new book published by Glenn Beck (although there is some controversy over whether he stole credit for it). But it is so much more than just another literary divergence. It is both a book and an action plan to combat the plot to impose what Beck describes as “centralized control over all of human life on planet earth.” The book is presented as a “thriller” but it incorporates the very same paranoid ravings that Beck and other whack jobs are spewing. The obsessive fear of a UN led one-world government goes back decades with roots in the neo-fascist John Birch Society’s anti-communist campaigns. The Birchers, along with conspiracy kingpin Alex Jones, appear to be where Beck lifted this issue. And, not surprisingly, Beck also injects George Soros into the affair as its clandestine financier.

Beck’s fictionalized version of Agenda 21 describes a future America where “There is no president, no congress, no freedom. There is only Agenda 21.” Of course, Beck takes these horror stories seriously and extends them to new extremes with accusations that many local municipalities are already secretly putting the dastardly Agenda 21 principles into effect. He constructs a delusionally apocryphal scenario wherein Agenda 21 is the road map to tyranny. He is even mounting an effort to fight back by deputizing his glassy-eyed disciples to report back to him any evidence of the plot’s advance. There is a link and instructions for how to communicate with his own central command center, which he calls the Agenda 21 National Registry…

“Agenda 21 relies heavily on local governments. The problem is that there is currently no way to track on a national level just how prevalent Agenda 21-related efforts have become. But you can help. Check your town’s council minutes and agendas (and those of committees as well) or, if possible, attend a meeting. If any Agenda 21-related efforts have been discussed or implemented, please let us know!”

Beck helpfully includes a list of “keywords” that his faithful can use to recognize Agenda 21’s covert implementation. Among the frightening words that Beck warns are proof that the invasion has commenced: communities, quality, justice, sustainable, education, development. If you encounter any of these frightful buzzwords being used by your city government, then get the hell out of town, buy farmland, gold and guns, and be prepared to defend God and country from your cornfield bunker. For more of these incriminating words, refer to this actual word cloud from Beck’s web site: 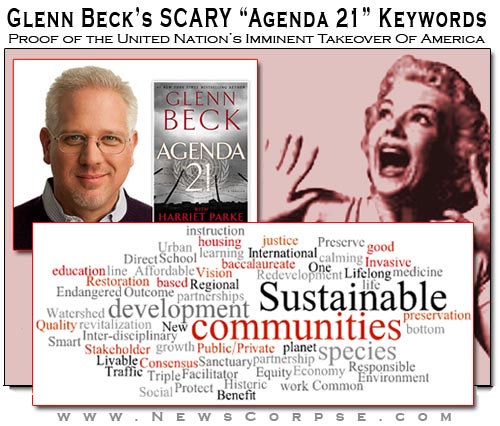 By recruiting his spellbound followers, Beck hopes to build an army of informers who will populate his registry with ghastly evidence that global environmentalists and economists are well on their way to shackling Earth’s inhabitants via the oppression of economic equality, social justice, and {gasp} clean air and water.

It simply doesn’t get any crazier than this. What’s sad is that there are actually people who regard Beck as a righteous visionary struggling to save mankind. It’s going to be a tragic day when Beck leads his followers to Guyana and offers them all some tasty Kool-Aid. That will likely come after some valiant Beckian has attempted to cleanse the country of some the progressives that Beck has called a “cancer on America.” Hopefully these dire predictions will not come to pass, but Beck is playing with hellfire by inciting his audience of dimwits whose behavior cannot be accurately forecast.

Thom Hartmann on Beck and Agenda 21: