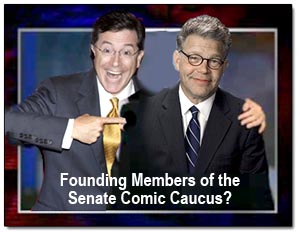 Public Policy Polling has just released a new survey of South Carolina residents on who they would prefer as the replacement for Sen. Jim DeMint, who is leaving the senate to head the conservative Heritage Foundation.

Among those included in the speculation are long-time state pols like former governor Mark Sanford, his ex-wife Jenny Sanford, congressmen Tim Scott, Joe Wilson, and Trey Gowdy, and GOP official Henry McMaster. All of these folks would be conventional picks for Governor Nikki Haley, whose responsibility it is to appoint DeMint’s successor.

But leading the pack is Comedy Central’s Stephen Colbert, a South Carolina native and former candidate for President of the United States of South Carolina. According to PPP…

“Colbert tops the wish list of who South Carolina voters would like to see join that body at 20%, followed by Tim Scott at 15%, Trey Gowdy at 14%, Jenny Sanford at 11%, Henry McMaster and Mark Sanford at 8%, Jeff Duncan and Joe Wilson at 5%, and Mick Mulvaney at 4%.”

This could send shock waves through the political world. Colbert has a hefty campaign war chest via his Super PAC that has nearly a million dollars left over from the presidential campaign. He has a devoted following that is nationwide in scope, and a platform for expressing his views on his television show, which gets a bigger audience than Fox News. He has testified before congress on labor issues. He delivered an epic speech before the White House Correspondents He has won two Peabody Awards. However, he also has powerful enemies. Nancy Pelosi launched the Stop Colbert campaign earlier this year:

Yet to be heard from is Minnesota senator Al Franken. The two have a common background and could form a coalition in the senate to advance legislation favorable to political satirists. A “Comic Caucus” in Washington could be a significant counterweight to the other congregation of politi-clowns, the Tea Party.

Neither Colbert nor Gov. Haley have given any indication of their intentions. For Colbert the decision has to include consideration of the fact that a seat in the senate would be a demotion for him. He has far more influence where he is now, although he could earn more money taking kickbacks from lobbyists who would eventually provide him with a multimillion dollar job when he tires of the senate, just as Sen. DeMint has done.