Last night on the O’Reilly Factor, Bill O’Reilly delivered his nightly Talking Points Memo on a subject with which he has profound familiarity: Incivility. 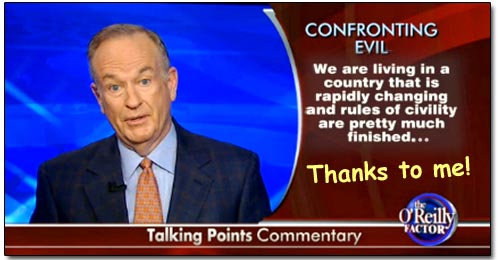 The pretext for this sermon on manners was an article by Fox Sports columnist Jason Whitlock. Whitlock was the author of the column that Bob Costas referenced in his now famous remarks about guns in American culture. So O’Reilly invited Whitlock to come on his show and Whitlock rather colorfully declined:

“I don’t have to shuffle off to the big house when summoned. O’Reilly is not Boehner, Pelosi or Obama. He’s a TV entertainer who has spent the weeks after the election crying about the end of the ‘white establishment’ America, the end of the days when an upstanding white man felt entitled to summon whomever he wanted whenever he wanted to the big house to dance. I don’t dance.”

As usual, O’Reilly didn’t take that well. He is well known for his arrogant self-righteousness and his egomaniacal worldview. Anyone with the temerity to challenge him had better steady themselves for battle. O’Reilly devoted his Talking Points to Whitlock, however he framed his retort in the broader context of what he thinks is a new rejection of civil discourse:

“We are living in a country that is rapidly changing. Rules of civility are pretty much finished. […] There are elements on both the left and the right that are using disgraceful tactics to demean those with whom they disagree.”

O’Reilly then went on to cite two examples, however, both were of liberals allegedly denigrating conservatives. So much for balance. In the first example O’Reilly bashed proponents of marriage equality for referring to “traditional marriage” advocates as homophobes and “haters.” Then O’Reilly called those who favor marriage and love for everyone “haters.” His second example dismissed any suggestion that there are Obama opponents who might be driven by racism, and anyone who implies such a thing is disgraceful.

The irony of O’Reilly criticizing others for incivility is astonishing. No one has contributed more to the advance of incivility than O’Reilly himself. He is the host of a regular segment that labels people with whom he disagrees “Pinheads.” And he frequently disparages his opponents as “loons.”

Even more damning is the fact that a study by researchers at Indiana University documents the intimidation and propagandizing employed by Fox News’ resident bully. The study, sub-titled, “Revisiting World War Propaganda Techniques,” paints an academically verified picture of O’Reilly’s repulsive modus operandi. Contrary to O’Reilly’s assertion that he doesn’t “do personal attacks,” the IU study spells out the truth:

“The IU researchers found that O’Reilly called a person or a group a derogatory name once every 6.8 seconds, on average, or nearly nine times every minute during the editorials that open his program each night.”

The IU study itemized seven propaganda devices as defined by the Institute for Propaganda Analysis. O’Reilly was found to have employed six of them nearly 13 times each minute:

Sound familiar? That’s pretty much a script for every episode of The Factor. O’Reilly is an insult machine who castigates ideological adversaries and interrupts guests even while he bellows about how he thinks the left is “abusing freedom of speech.” Yet he still has the gall to lecture others on the dying of civility in America. It’s that kind of self-delusion that typifies right-wing blowhards like O’Reilly. They simply can’t see their own gaping flaws that lurk behind the towering prejudices they erect to their perceived enemies.

[Update:] On tonight’s program O’Reilly had something to say about being civil to racists: 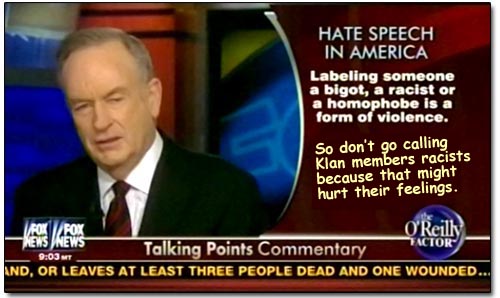 If you can believe it, O’Reilly is more concerned about the “violence” of labeling than the violence of bigotry.

7 thoughts on “Bill O’Reilly’s Rules Of Civility: From The Magistrate Of Pinheads And Loons”