The InterTubes are abuzz with a piddling story about a douchebag from Breitbart/Fox News who got what looks like a popped pimple on his forehead after confronting union protesters in Michigan. 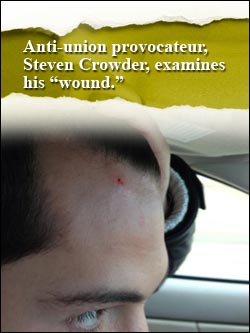 Steven Crowder, is a self-described comedian (though there is no evidence to document that) who is trying to make a name for himself by emulating faux-journalist James O’Keefe. That mission brought him to Lansing, Michigan yesterday where he somehow managed to rile up an otherwise peaceful gathering of 13,000 union protesters. One has to wonder why the only report of hostility just happened to be where Crowder was stationed with his video team.

The video Crowder later posted on line was, in the style of O’Keefe, heavily edited. The portion that showed an alleged union member swinging at Crowder was cut to exclude most of the activity prior to the altercation. However, in a longer clip that was shown on Hannity (below), it could be seen clearly that just prior to the swingfest, the union member was on the ground. There is no explanation for how he got there, such as the possibility that he had been assaulted first by Crowder and was retaliating. Crowder has repeatedly lied in saying that he was sucker-punched, because the video also clearly shows that he was facing the union member at the time the punches were thrown. And it appears that the union member was reacting with the sort of anger that someone who had just been assaulted might be feeling. Also, Crowder rushed the union member after the first punch, displaying his size advantage, but then pulled back as if he just remembered that the cameras were rolling and he had forgotten momentarily his goal of portraying the protesters as violent.

For someone who was allegedly brutalized by fiendish thugs, Crowder seemed rather giddy in his subsequent appearances on Fox News (twice in less than 24 hours). He confessed to Sean Hannity that he intentionally sought to provoke the protesters, saying with a smarmy smile…

“I went out here to prove the left for who they truly are. Certainly, these union thugs. And I’ve achieved that.”

On Fox & Friends Crowder issued a contrived macho challenge to the union member to engage in a Mixed Martial Arts match – an absurd suggestion considering that he is bigger and younger than his opponent, and trained in MMA. Crowder is scheduled for another Fox stint with Neil Cavuto tonight.

The entire demeanor of Crowder in his post-bout media tour is one of someone proud of having successfully carried out a preconceived mission to fabricate bad publicity for the workers seeking to defend their rights. This is not a game to them. They have just been sucker punched themselves by a right-wing state regime that is assaulting their jobs, their livelihoods, and their families. The Michigan governor and legislators rammed this law through without notification or public debate.

To make matters worse, Fox News, and others in the conservative mediasphere, have thrown their own sucker punches at America’s working families by promoting right-to-work (for less) laws that have been proven to result in lower wages, worse working conditions, and have never been shown to create additional jobs. Nevertheless, Fox has characterized the Michigan law as a “victory for capitalism.” They have long sought to portray union members as thugs, rather than as the families they are, struggling to support themselves in a society that permits corporations to make record profits, lavish million dollar bonuses on executives, and then whine that they have no money to fairly compensate their working-class employees.

This sort of misrepresentation and vilification of average Americans goes on daily in the right-wing press. It is emotional abuse that has to pile up over time and create anxiety and frustration. While violence is never an appropriate response to a political dispute, these occurrences have to be evaluated in the broader context of the environment that surrounds them. And when people are being attacked by their so-called representatives, and their lives are being upended by out-of-touch elitists, it is hard not to expect that tempers will flare.

That may have occurred yesterday in Lansing. Or it may be that an overzealous media whore initiated the entire affair with his own provocative behavior and hostility. Time may shed more light on the facts, but it is undeniable that working Americans are not going to give in to the corrupt bosses in executive suites and statehouses. Nor should they. Working people are the backbone of our nation and they deserve better than to be exploited by self-serving politicians and third-rate clowns acting as outside agitators.