Once again, the proclivity for deception and dishonesty as practiced by Republicans and right-wing media has earned them the honor being awarded “Lie Of The Year” by the fact-checkers at Politifact. 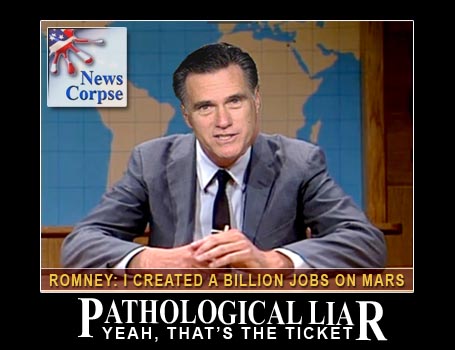 There were so many deserving lies told by Mitt Romney and his campaign that it must have been a difficult choice for the folks at PolitiFact. The particular lie that captured the prize this year was Romney’s claim that Barack Obama “sold Chrysler to Italians who are going to build Jeeps in China” at the cost of American jobs. As noted by PolitiFact:

“It was a lie told in the critical state of Ohio in the final days of a close campaign — that Jeep was moving its U.S. production to China. It originated with a conservative blogger, who twisted an accurate news story into a falsehood. Then it picked up steam when the Drudge Report ran with it. Even though Jeep’s parent company gave a quick and clear denial, Mitt Romney repeated it and his campaign turned it into a TV ad.

“And they stood by the claim, even as the media and the public expressed collective outrage against something so obviously false.”

Indeed, the Romney camp dug in their heels when criticized about the brazen dishonesty of their claim. But then this is the candidate who proudly declared that “We’re not going to let our campaign be dictated by fact checkers [who have] jumped the shark.” It is the campaign whose strategist admitted that they could simply “Etch-a-Sketch” away the extremist conservative positions they touted in the GOP primary. And Romney set a record for assaults on the truth by earning 84 citations of falsehoods (41% in all) by PolitiFact, 19 of which were “Pants-on-Fire.”

It would, however, be unjust to let Romney walk away with all the glory. He had plenty of help from right-wing media, most notably Fox News. Most of the Fox menagerie joined in to defend Romney’s fibbing, including Neil Cavuto, Sean Hannity, and the incorrigible kiddies at Fox & Friends. And, of course, Fox was backed up by notorious prevaricators across the web like the Drudge Report and the anti-fact-checkers at NewsBusters.

Lest anyone come away with the impression that the reality-based community as represented by PolitiFact is secretly in league with the Obama cabal, none other than Fox Nation has endorsed them on numerous occasions, eagerly citing their analyses when it served their purpose. Of course, they also conveniently lost their link to PolitiFact when the results didn’t go their way. That’s the modus operandi of the fair and balanced network.

This addendum to the campaign of 2012 puts a lovely bow around what was the most consistent theme of the GOP throughout the year: Lies, lies, lies. And in the days following the election, Republican operatives have declined to acknowledge that this strategy hurt them in the minds of voters. Consequently, we can expect this sort of duplicity to be a part of future Republican campaigns. The GOP may not be doing all that well getting their candidates elected, but they might very well have a lock on PolitiFact’s Lie of the Year award for many years to come.