You know that a “news” enterprise is desperately biased when they can’t even report on their own polling honestly. In the case of Fox News, they have been relentlessly advocating the Republican position on the so-called “fiscal cliff.” They believe wholeheartedly that fighting for the wealthiest 2% to get another break on their taxes is so important that it’s worth making every American pay more rather than give in.

In order to support their crusade for the rich, Fox conducted a poll wherein they asked respondents to indicate their preferences for dealing with the budget deficit. In fact, Fox asked the question in a variety of different ways, seemingly to insure that eventually they would get the answer they wanted. And guess what?

After several attempts, Fox managed to find a framing of the issue that produced their desired response. So they went with that in their headline saying “According to voters, spending cuts are a must.” 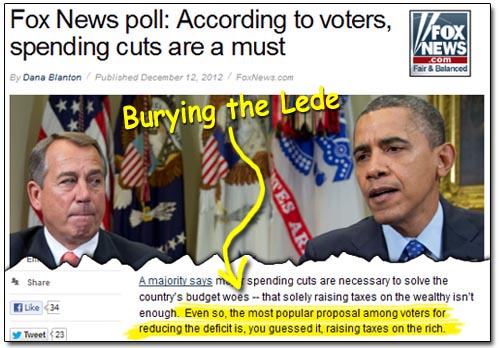 However, the actual question that produced that response did not reflect any proposal by either side in the budget debate. Here is the question:

“Do you think raising taxes on the wealthy can solve the country’s budget problems — or do you think major spending cuts are necessary also?”

It’s the “also” that tells the real story. Since nobody has proposed raising taxes alone as a method of reducing the national debt, the question is a red herring that proves nothing. Even President Obama, were he asked, would have told Fox’s pollsters that spending cuts were a must. He has consistently said that he is seeking a balanced approach that includes both spending cuts and a small increase in the tax rate for incomes that exceed $250,000.

Despite that fact, Fox News proceeded with a headline that inferred a preference on the part of the public for spending cuts without any mention of higher taxes for the rich. But here’s the fun part. Another question in the poll asked respondents to rank a list of proposals to reduce the federal budget deficit. The most popular item turned out to be “Increasing taxes on incomes over $250,000 a year” (69%). That item was favored by a majority of every political group: Democrats 87%; Republicans 51%; Independents 68%.

You would think that the highest rated option in the poll would make it to the top of the article, yet for some reason the editors at Fox chose a headline that was further down the list of preferences. We know, however, that they were aware of the taxing response because they put it in the second paragraph of the article, although their tone was somewhat dismissive:

“Even so, the most popular proposal among voters for reducing the deficit is, you guessed it, raising taxes on the rich.”

Fox should recognize that the reason their audience would guess this fact is because it has been established in pretty much every other poll that has been conducted on this subject. Also, there was an election held recently (remember that?) during which the question of whether the rich should pay more in taxes was directly addressed. And the candidate favoring higher taxes on the wealthy won by a substantial margin.

Fox News obviously doesn’t care about honest reporting or journalistic ethics. They prove that daily in their mangling of stories to deliberately harm the President and to promote a conservative agenda. But you know they are in deep denial when they have to resort to misrepresenting the results of their own polls. They did this repeatedly during the election, and it doesn’t look like they intend to operate any differently even after their deceit proved to be a losing strategy.

On a side note, the Fox News poll routinely publishes a demographic breakdown of the results with categories that include political party, gender, race, age, and income. One category that has been included for some time now was missing from this poll: The Tea Party. Apparently Fox no longer regards the Tea Party as having enough significance to warrant breaking out their survey results. That omission is pretty significant and ought to make some news itself.

2 thoughts on “Burying The ‘Tax The Rich’ Lede: Fox News Misrepresents Their Own Poll”