It may seriously be time to have the folks at Fox committed to an institution for evaluation. They have become utterly unhinged, particularly with regard to election polling which is notoriously volatile. So without further ado, here’s a graphic illustration of the depths of their dementia.

First, Fox News loves polls and posts them abundantly when Romney is ahead: 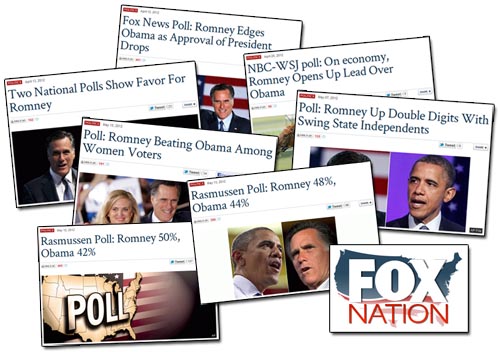 Then Fox News hates polls and banishes them when Obama surges into the lead: 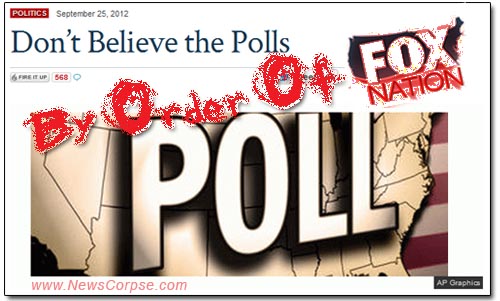 Then Fox News loves polls again when Romney gets a post-debate bump: 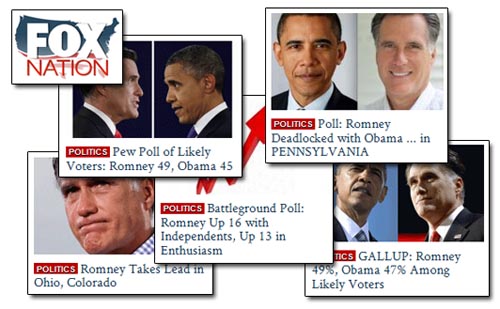 They are leading their audience on a roller coaster ride of propaganda and censorship as they shift from celebrating positive electoral news to suppressing the negative. Fox is so determined to shut out anything that might challenge their delusions that they even fail to report their own Fox News polls if Obama is ahead. 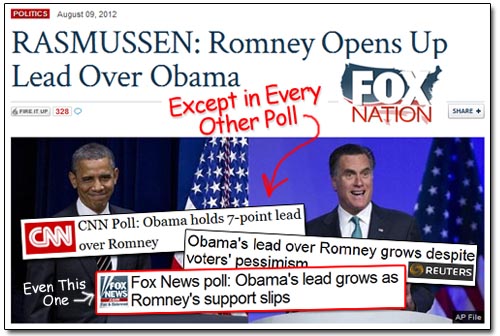 That’s how important it is to them to make sure their audience remains ignorant. And all the while they seem to think that it’s liberals who are fooling themselves. 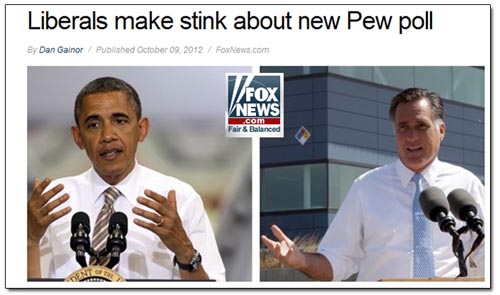 The article above was written by Dan Gainor of the uber-conservative Media Research Center. The MRC recently launched a campaign to get people to stop watching what they call the “mainstream” media which, of course, doesn’t include Fox News, the highest rated cable news network. That’s really just a campaign to put blinders on the eyes of their right-wing disciples to keep them from being tainted by honest journalism and diverse opinions.

It’s ironic that Gainor is criticizing liberals for disparaging a poll when conservatives are the ones that are totally blocking out any polls they don’t happen to like. They spent hours on the air alleging that the media is deliberately skewing the polls. But what’s worse is that Gainor is making up his allegation that liberals attacked the Pew poll. There is nothing in his article that supports that charge. In fact, quite the contrary. While Gainor cited the Daily Beast’s Andrew Sullivan and the New York Times’ Nate Silver, neither of them criticized Pew’s survey. And Gainor thoroughly misrepresented the column by Joshua Holland of Alternet saying that Holland’s column “could be summed up in one word: disbelieve!” For the record, here is what Holland had to say about whether the Pew poll should be dismissed:

“No. That’s making the same fundamental error as the “poll truthers” on the right. […] Good polls using industry standard methodology can and do find wide variation in party ID – leave the trutherism to the nutjobs at Fox News.”

At no point did Holland say to “disbelieve” Pew or any other poll. In fact, his column is a great resource for understanding and evaluating polling in their proper context and is highly recommended reading. It offers a calm and sane approach to analyzing news, as opposed to the feverish ravings of the FoxPods who accuse all of the media of skewing all of the polls – that is, until the polls favor their candidate.

The only thing Gainor’s article does is affirm the dishonesty of the right and their obsessive determination with controlling the thinking of their cultish followers. His fabrications are surely part of the reason that readers and viewers of Fox News are so lost in a muddle of conflicting fantasies. Generally when someone is this detached from reality they are taken somewhere where they cannot present a risk to themselves or others. Unfortunately, these deluded souls are still allowed to drive automobiles and, worse, to vote.