Here is a disturbing report from a local news broadcast in Toledo, Ohio. An Indiana man pleaded guilty to arson for having set fire to an Islamic Center in Toledo. He was sentenced to 20 years today and, in an exchange with the judge, revealed his motivation.

The judge asked him if he knew any Muslims or what Islam is. He said “No, I only know what I hear on Fox News.” 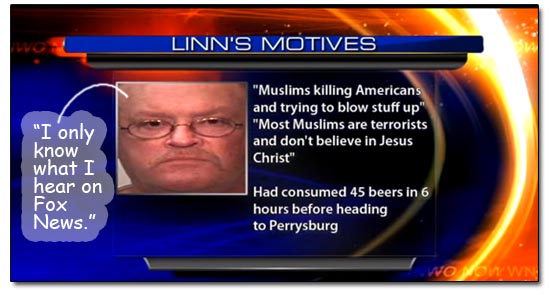 The producers at Fox must be so proud of the prejudice they inspire with their overtly hateful coverage of any subject that deals with Muslims. Their scandal mongering a couple of years ago about the Park51 Islamic Center in Manhattan was evidence of just how biased the network is against Muslims. And numerous Fox anchors and guests have engaged in the slander that all Muslims are terrorists, or that all terrorists are Muslim.

This is a particularly interesting display of prejudice considering that the largest shareholder of News Corp outside of the Murdoch family (and a financier of Park51) is the Muslim Prince Alwaleed Bin Talal of Saudi Arabia. However, there are numerous examples of Fox News taking positions that are in stark contrast to CEO Rupert Murdoch’s publicly stated views. Either Murdoch’s control has been usurped by Roger Ailes or he has become senile and incognizant – or both.

It should not be surprising that one of their loyal viewers decided to commit what he thinks is an act of patriotism. After driving into their heads the notion that Muslims are America’s enemies, even when they are American citizens, congressmen, or soldiers, Fox’s audience has become indoctrinated by the prejudice that gushes from the network’s broadcasts. Now we know that a member of that audience has taken the next step in manifesting the hate that Fox manufactures. And it cannot be explained away as a legal tactic to avoid responsibility because he already pleaded guilty.

This is not the first time something like this has happened either. There was the story about a woman who threatened to fire all of her black employees if they voted for Obama, and she wrote “KKK” on their time cards. Her excuse? “I think I got crazy with FOX News, watching too much FOX News.” And there were at least two maniacs inspired by Fox’s Glenn Beck (here and here).

This is the predictable result of the feverish rantings that occur daily on Fox News. The anchors, producers, and advertisers are responsible for the harm that is done by people they knowingly incite to violence. This does not mean that Fox is directly responsible for the violence itself, but that they have some culpability for having infected their audience with the hateful lies that can lead to these measures. Hopefully someday one of their victims will be courageous enough to hold Fox accountable and make them pay a price for their hate speech.

25 thoughts on “Mosque Arsonist Tells Judge: “I Only Know What I Hear On Fox News””