Last night Sarah Palin once again appeared on her old pal Greta Van Susteren’s show on Fox News. She was asked to comment on Time Magazine’s selection of President Obama as “Person of the Year.” And, what a surprise, the ego-driven Queen of the North could only find nasty things to say about Obama, who was chosen, not as an endorsement of his agenda, but as recognition of the reelection victory that illustrated the changes in America’s identity. Time wrote…

“We are in the midst of historic cultural and demographic changes, and Barack Obama is both the symbol and in some ways the architect of this new America. In 2012, he found and forged a new majority, turned weakness into opportunity and sought, amid great adversity, to create a more perfect union.” 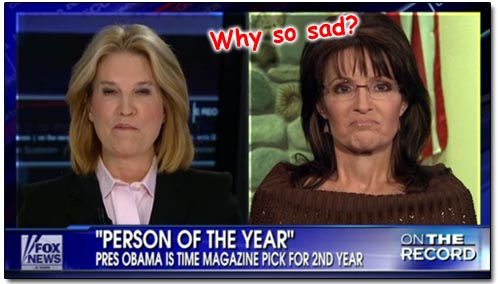 Perhaps Palin was upset that the article accompanying the choice never mentioned her by name, but did note that her characterization of Obama’s tenure as “hopey/changey” was passe. Her sour grapes session criticized Time Magazine’s choice due to some vague, unspecified allegation that Obama doesn’t support the Constitution. She complained that he wants to change the Constitution, which is, of course, constitutional and is provided for in the document. It has been done twenty-seven times already. But she concluded with a statement I agree with wholeheartedly:

“Time Magazine, you know, I think there’s some irrelevancy there to tell you the truth. I mean consider their list of the most influential people in the country and in the world, some who have made that list – yours truly – that ought to tell you something right there regarding the credence that we should give Time Magazine and their list of people.”

She is referring to her place on the Time 100 back in 2010. The tribute to her was composed by washed-up schlock-rocker Ted Nugent, who continues to embarrass himself in public with demented, anti-American rants. And not to be outdone, Palin also embarrassed herself with Van Susteren in a discussion about the newly released report on the State Department’s handling of security in Benghazi, Libya.

Van Susteren and Palin both complained that there was no accountability for security failings, despite the fact that three State Department officials resigned shortly after the report’s release. And they both knew of the resignations because they mentioned them in the segment. Palin also asserted without support that “Americans were lied to.” She went on to whine…

“For the President even to get out there on a national stage and tell Americans untruths about this situation in Benghazi really begs you to ask the question, what else does he say and do that would be deceptive. I believe that it’s many, many things that he would say and do being deceptive.”

Neither Palin nor Van Susteren gave a single example of anyone being less than truthful. And neither did the report, which addressed the security situation in Benghazi, not the subsequent media frenzy Fox tried to incite.

It’s a little sad to see the pathetic scratching on the screen door by Palin who has all but vanished from public view. She is probably milking these appearances with Van Susteren because there is a high probability that her contract with Fox will not be renewed when it expires next year. And who else would have her? Her books don’t sell, her reality TV shows fail, and her own party is so ashamed to be associated with her that she wasn’t even invited to the Republican convention this year.

It may be fair (and balanced) to say that Palin is over – you betcha!