When Fox News grabs hold of a blatant and self-serving lie, they just won’t let go no matter the cost to their credibility (assuming they had any). The latest of example of this destructive tenacity is a story on Fox Nation that unbelievably declares that “Romney Was Right: Chrysler CEO Announces Plans to Build More Jeeps in China.” 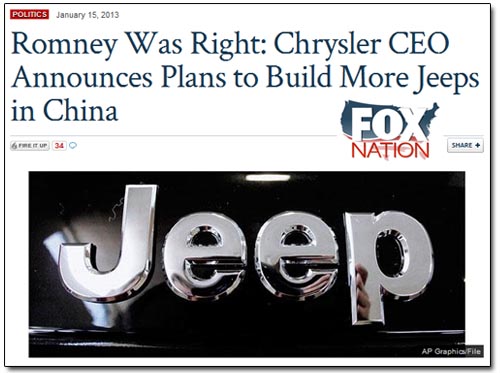 Umm, no, Romney was not right. In fact he was so outrageously, horrendously, desperately wrong that his craven assertions about Jeep manufacturing were awarded “Lie of the Year” for 2012 by Politifact:

“Even though Jeep’s parent company gave a quick and clear denial, Mitt Romney repeated it and his campaign turned it into a TV ad. And they stood by the claim, even as the media and the public expressed collective outrage against something so obviously false.”

Of course, the Romney campaign had explicitly castoff any respect for truth when they introduced their Etch-a-Sketch strategy and declared that facts had “jumped the shark.” But for the Fox Nationalists to reach back to last year’s most notorious falsehood and feature it on their news feed is an act of the purest chutzpah.

The Washington Examiner article to which Fox Nation linked provided no new information relating to Chrysler’s Jeep production plans. Chrysler has always maintained that there would be jeep facilities in China and elsewhere for foreign consumption, but that the U.S. would be the “backbone of the brand,” and that American jobs would not be transferred to other countries. That is still the case and was merely reiterated in the recent news from Chrysler.

Nevertheless, Fox is dishonestly advancing a lie that was soundly debunked long ago, and with a smug, ersatz satisfaction that they were proven right, even though they were not. The only explanation for this departure from reality is that Fox is attempting to set new records for pathetic idiocy. Luckily for them, their editors are already the reigning record holders.

[Update 1/19/13] Talk about tenacious… Not four days since the Fox Nationalists posted this nonsense, they have repeated the falsehood with another posting headlined “Politifact’s ‘Lie Of The Year’ Is Actually True.” This time they sourced their sloppy pseudo-journalism to the Weekly Standard. But it is no less a lie now than it was the first time they proffered it.