The lust for open hostilities and bloodshed is palpable amongst the folks at Fox News who are deliberately inciting all out war and encouraging their audience to embrace their most malevolent tendencies and act them out. 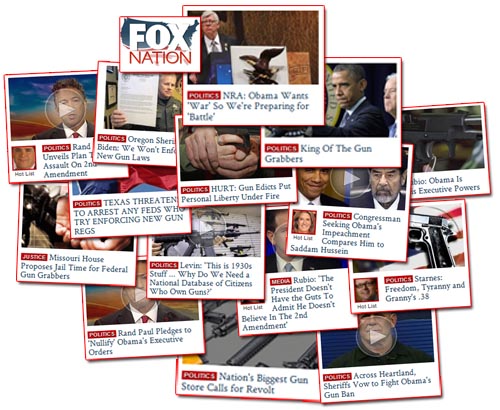 This dangerously irresponsible effort is revealed on the network broadcasts and in the editorial decision making on their web site. There are presently at least fifteen separate stories with delusionally hyperbolic headlines. Fox is feverishly framing the debate on gun safety as one that is un-American, unconstitutional, and an elaborate scheme by a tyrannical administration whose desire they believe is to subjugate the nation’s population and force them into slavery. They present President Obama’s proposals as an imminent threat to liberty and personal safety.

What does Fox expect to happen when they terrify their viewers with assertions that their very freedom is at risk? Is Fox conscious of the animus that is already prevalent among right-wingers who are convinced that the President is a foreign agent working on behalf of our enemies? Are the network executives taking these delirious fictions into consideration when they publish headlines like these?

There can be only one purpose for this sort of inflammatory rhetoric. Fox intends to increase the heat beyond the boiling point for people who are already on the verge of drastic action. The people for whom this resonates are deeply disturbed by delusional threats of oppression and servitude. What makes this even more troublesome is that these same people are likely to be heavily armed and not averse to using their firepower to defend their country from phantom enemies.

Fox seems to be trying to convince these Psycho Chicken Littles that now is the time to step forward and pledge their lives to the cause of freedom as defined almost singularly by the right to possess weapons of carnage that were never meant to be deployed outside of military use in wartime. But that’s what Fox thinks this is: Wartime! And their obsession with portraying fellow Americans who have a difference of opinion with them about the interpretation of the Second Amendment, as traitors can only have tragic consequences. 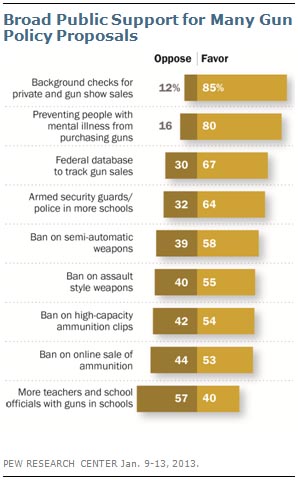 A brief review of the stories illustrated above is evidence of the extremism that Fox is tapping into. It is not accidental. They are executing a deliberate strategy that is fraught with risk and is contrary to the views of the majority of Americans. A new poll by the Pew Research Center shows that large bipartisan majorities favor bans on semi-automatic weapons (58%), bans on high-capacity ammunition clips (54%), and universal background checks (85%). The only option in the poll that garnered less than 50% was the one advocated by the NRA to increase the number of guns in our communities.

With support like that from the people, it is plain that Fox is directing their rhetoric at the fringes – the malcontents and miscreants who are most likely to wreak havoc. Exacerbating this problem is the fact that the fringes are no longer relegated to their traditional place at the outer rungs of society. Today they are on television and in congress. We have numerous public “servants” talking about secession, insurrection, nullification, and impeachment. And the presence of Fox News, a cable news network that rewards such talk, and participates in it, is only asking for trouble.