On several notorious occasions Fox News has “accidentally” labeled dishonest or scandalized Republicans as Democrats. It seems to be a strategy on their part to protect the GOP from bad publicity while tarnishing their opponents. And despite their “zero tolerance policy” for such errors, they never air corrections or apologies.

Consequently, it should not come as a surprise that Fox, in tandem with the uber-rightists at NewsBusters, have ratcheted up a phony controversy concerning the party affiliation of former New Orleans mayor Ray Nagin, who was just indicted by a federal grand jury on 21 counts of conspiracy, bribery, money laundering, tax fraud and filing false tax returns. 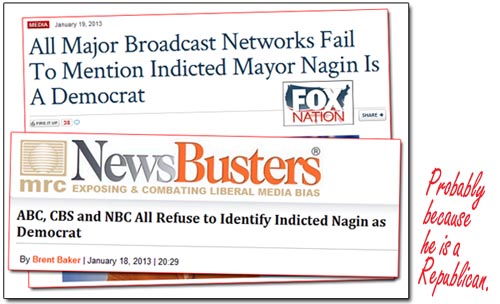 The right’s panic over whether or not the media should have identified Nagin as a Democrat ignores the fact that his association with the Democratic Party was a matter of political opportunism. Nagin had been a registered Republican for most of his adult life. He only switched parties when he decided to run for mayor of the heavily Democratic city of New Orleans. Even after his election he associated with, and behaved as, a Republican. As mayor he routinely favored the interests of his business constituents over the people. He was an avid supporter of George W. Bush prior to his election, and GOP governor Bobby Jindal afterwards. The most damning evidence that Nagin is, and always has been, a Republican is the nature of the crimes for which he was indicted.

“Nagin used his public office and his official capacity to provide favorable treatment that benefited the business and financial interests of individuals providing him with bribery or kickback payoffs.”

That’s pretty much the hallmark of Republican politics. Were he a Democrat there would have been charges connected to union malfeasance or public works projects. But Nagin was acting on his nature as the life-long Republican he truly is. Neither Fox nor NewsBusters bothered to point out these facts.