Last November the GOP lost two senate seats that Republicans should have won easily. In both Missouri and Indiana GOP candidates made shockingly ignorant and insensitive comments about rape that cemented the anti-woman attitude that permeates the party. It wasn’t enough that they oppose a woman’s right to choose, they voted against the Violence Against Women Act, they resist efforts to secure pay equity, etc., they also felt it necessary to reveal that they regard rape-induced pregnancies as blessings and that they know nothing about the reproductive system that they so feverishly wish to regulate.

Having been incapable of countering their obvious disdain for half of the electorate, Republicans, with the help of Fox News, are now trying fabricate an equivalent controversy by a Democrat. Unfortunately, they are only further demonstrating their pitiful lack of understanding. Here is the Fox Nation headline story this morning: “Democrats Have A Full-Blown Akin On Their Hands.” 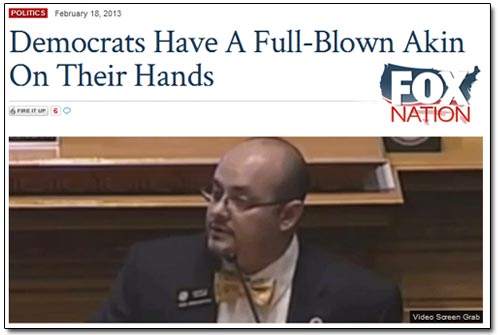 First of all, could they have come up with a more disturbing way to say that? More to the point, the Fox Nationalists seem to have no idea what the original controversies were about. To refresh the record, it was Missouri’s Todd Akin who said that womens’ bodies had a magical ability to distinguish between friendly and unfriendly sperm. It was Indiana’s Richard Mourdock who opined that babies resulting from rape were God’s gift to the rape victim.

However, the comments by a Democratic state senator in Colorado are not remotely similar. Joe Salazar was engaged in a debate over arming students at Colorado universities. He opposed the measure and stated his reasons to his legislative colleagues:

Salazar was not making any absurd statements regarding the physiology of women or the ancillary benefits of rape. He was simply noting that armed civilians might possibly misinterpret the intentions of someone else and that such a mistake could lead to the tragic shooting of an innocent person (remember Trayvon Martin?).

Nevertheless, Fox Nation saw fit to compare this perfectly reasonable argument against the proliferation of guns to the Akin affair, to which it has nothing in common. To make matters worse, the issue was also taken up on Fox News when Laura Ingraham visited the Kiddie Krew at Fox & Friends. Ingraham twisted the matter to imply that Salazar was opposed to women defending themselves from known rapists. But his remarks were clearly directed at situations where there was no actual threat and the suspected assailant was actually innocent.

That little complexity apparently made the Fox gang incapable of understanding Salazar’s comments. But it didn’t keep them from exhibiting their feeble-mindedness and leading their viewers down another blind alley of ignorance.