Last year there was a flurry of panicky hand-wringing by notorious conspiracy mongers like Alex Jones and the fruitcakes at WorldNetDaily and Newsmax. Reports that agencies of the federal government had purchased large caches of ammunition set the rumor peddlers tongues to wagging as they imagined brigades of Obama’s stormtroopers marching into the corn fields and trailer parks of rural America gunning down everything in their path.

This sickness infected much of the right-wing crackpot community and spread via chain letters and the blogs of Psycho Chicken Littles who were convinced by Glenn Beck that the End of Days was upon us. At the time, these ludicrous delusions were smacked down by more rational thinkers including those at PolitiFact. But the acutely deranged conservative mind is not an easy thing to assuage. And as a result the tales of doom persisted and are even now being retold by Fox News and its heralds. 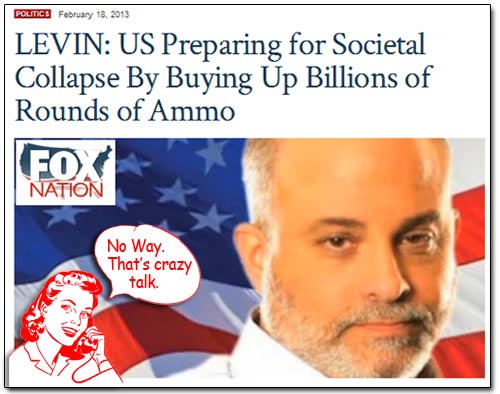 The latest incarnation of this horror story is a rehashing of the news that the Department of Homeland Security had purchased more than a billion bullets. In the minds of the nutcases on the right, that is evidence that the DHS is plotting a response to some impending disaster scenario wherein they will be forced to kill every person in America five times. That is precisely what Mark Levin, Sean Hannity’s replacement for Sarah Palin, is terrorizing his radio listeners with:

“I’m going to tell you what I think is going on. I don’t think insurrection. Law enforcement and national security agencies — they play out multiple scenarios. They simulate multiple scenarios. I’ll tell you what I think they’re simulating: the collapse of our financial system, the collapse of our society and the potential for widespread violence, looting, killing in the streets, because that’s what happens when an economy collapses.”

Repent sinners – the end is near. Never mind that in the past four years, since George W. Bush actually did come within a hair’s breadth of collapsing the economy, America’s financial state has recovered nearly everything it had lost. The stock market is higher today than it was before the crash. Housing markets are heating up. Unemployment, though still uncomfortably high, is three points lower than its recessionary peak. None of that, however, has any impact on the FoxPods who are stubbornly certain that we are on the brink of disaster.

What makes this particularly idiotic is that the DHS has fully explained the ammunition purchases and that explanation was even reported by Fox News in a wire story from the Associated Press:

“Federal solicitations to buy the bullets are known as ‘strategic sourcing contracts,’ which help the government get a low price for a big purchase, says Peggy Dixon, spokeswoman for the Federal Law Enforcement Training Center in Glynco, Ga . The training center and others like it run by the Homeland Security Department use as many as 15 million rounds every year, mostly on shooting ranges and in training exercises.”

The story goes on to note that these munitions were to be used by “more than 90 federal agencies and 70,000 agents.” In addition they are also used by Immigration and Customs Enforcement, the federal government’s second largest criminal investigative agency. But this exceedingly reasonable explanation didn’t deter Fox from advancing an utterly insane conspiracy theory. It’s what they do and, dammit, they do it pretty well.

[And for good measure…] Sarah Palin couldn’t resist the urge to make an ass of herself: