Yesterday a panel at CPAC (which I believe stands for Conniving Propagandists And Crooks) was held following the screening of “Hating Breitbart,” a crockumentary glorifying the late Andrew Breitbart. The topic of the event was “The Uninvited,” a reference to fringe conservatives who are allegedly kept from appearing in the mainstream media. Participating on the panel were several Breitbart-affiliated folks, including the disgraced video mangler, James O’Keefe, and a lone representative of Media Matters, Ari Rabin-Havt.

In the course of the discussion (video below) O’Keefe protested that he felt he was “held to a higher standard than any Pulitzer Prize winner.” Whereupon, BreitBrat editor Larry O’Conner defended O’Keefe by rejecting the notion that just because O’Keefe’s videos were found to have been deceptively edited that “everything O’Keefe does should be considered a fraud.” Actually, that’s precisely what should be done when someone has proven he’s a fraud on multiple occasions.

The discussion eventually veered off into an attack on Media Matters with O’Conner questioning the veracity of their content. When Rabin-Havt began to defend himself, in what seemed to be a transparently staged tossing of the baton, O’Conner recognized Breitbart’s Editor in Chief Joel Pollak in the audience and asked him to weigh in on the subject.

Pollak was visibly upset at what he characterized as a smear directed at him by Media Matters. He cited an article that he claimed accused him of being a birther. Standing in the audience he pointed his finger at Rabin-Havt and arrogantly insisted that “The next word out of your mouth should be ‘Sorry.'” But that was just a small portion of the generalized indictment he made of Media Matters:

Alright, let’s break this down. First of all, Pollak’s assertion that Media Matters makes unproven statements in their headlines is itself unproven. Media Matters is meticulous about documenting what they publish, and the “lefties” and others who read it care very much that thoroughness. As for the article Pollak referenced, it was posted on Media Matters on March 13, with the title “What The Media Need To Know About CPAC 2013.” Notice that there is nothing in the headline about anyone being birther and that Pollak isn’t in it at all. So much for his thesis that Media Matters composes false headlines and fails to back them up.

Ironically, Pollak’s complaint applies perfectly to his own article on Breitbart News that Media Matters was writing about in the first place. That article’s headline was “The Vetting – Exclusive – Obama’s Literary Agent in 1991 Booklet: ‘Born in Kenya and raised in Indonesia and Hawaii'” 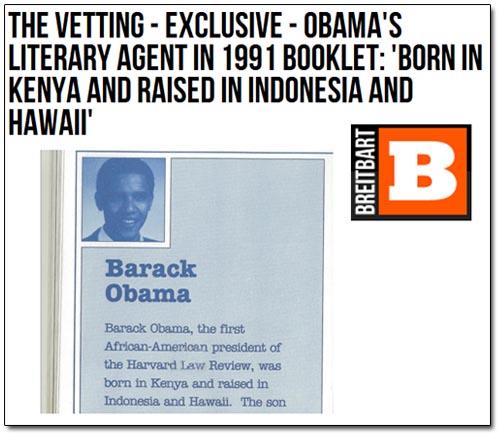 From the wording of that headline it would not be much of a stretch to conclude that the article was advancing birtherism by questioning Obama’s birthplace. Pollak said that he only intended to make a point that Obama, or his representatives, altered his biography when it suited him. However, that was not the inference in his headline. And it could be said of Breitbart what they said of Media Matters – that they “don’t care about the proof, they care about the headline.” What’s more, the first paragraph of the article began by affirming the birtherism in the headline:

“Breitbart News has obtained a promotional booklet produced in 1991 by Barack Obama’s then-literary agency, Acton & Dystel, which touts Obama as ‘born in Kenya and raised in Indonesia and Hawaii.'”

To be fair, there was a “Note from Senior Management” appended to the top of Pollak’s article that asserted that “Andrew Breitbart was never a ‘Birther,’ and Breitbart News is a site that has never advocated the narrative of ‘Birtherism.'” The fact that that note was necessary is telling in itself. But it’s a rather hollow disclaimer when the headline and the opening paragraph seemingly contradict it. Pollak also wrote that “The errant Obama biography in the Acton & Dystel booklet does not contradict the authenticity of Obama’s birth certificate.” That’s true, but as Rabin-Havt pointed out, he had not called Pollak a birther. He had simply asserted that Pollak and Breitbart were still responsible for advancing the birther theme even if they themselves did not subscribe to it. And they did that by publishing articles with misleading headlines and expecting to absolve themselves of the birther taint by rejecting it several paragraphs later.

This bit of theatrics staged by the BreitBrats fits nicely into their modus operandi. It is the sort of ambush that Breitbart himself would have enjoyed pulling off. And it even starred Breitbart’s budding video propagandist, little Jimmy O’Keefe. But once again, when the facts are revealed in full, their deceit is all too apparent. The Media Matters article did not call Pollak a birther in the headline. Although Breitbart’s article did question Obama’s birthplace in their headline.

So the BreitBrats got together and conspired to ambush Rabin-Havt with a false accusation that he had done what the BreitBrats actually did do. And then they complain when nobody will take them seriously, and they wonder why they are “The Uninvited” and why everyone hates Breitbart.