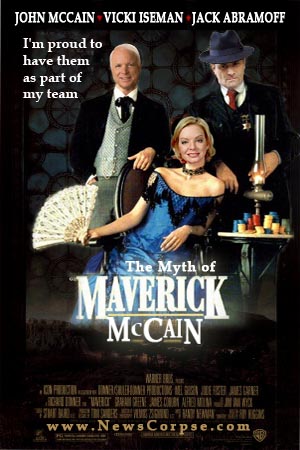 It hardly seems that a day goes by without a new revelation of lobbyists in John McCain’s campaign. Last week I reported that, so far this year, five tainted staffers have had to resign. Still on the McCain wagon are uber-lobbyists Charlie Black and campaign manager Rick Davis. Media Matters has compiled a superb list of even more tainted McCain staffers

Now the Washington Post is reporting another unethical, and perhaps illegal, McCain relationship with a political benefactor. Citizens Against Government Waste (CAGW) has a long history with McCain. They have endorsed his candidacy for president, heralded him as a “Taxpayer Hero” and contributed $11,000 to his campaign. The Post article describes an even deeper partnership that potentially violates election law prohibiting coordination between campaigns and independent advocacy groups:

“For weeks, Republican presidential candidate John McCain had been hammered for supporting the Air Force’s February decision to award a $40 billion contract for refueling tankers to Northrop Grumman and its European partner. Democrats, labor unions and others blamed the senator for a deal they say could move tens of thousands of jobs abroad.

McCain’s advisers wanted to strike back against key Democratic critics. But they did not mount an expensive advertising campaign to defend the candidate’s position. They called a tax-exempt nonprofit closely aligned with the senator from Arizona, seeking information and help.

Citizens Against Government Waste (CAGW) partnered with Northrop and one of its consultants to produce a vitriolic advertising campaign defending the tanker deal.”

In addition to the rash of lobbyists fleeing McCain’s campaign, two of his closest allies, Sens. Joe Lieberman and Lindsey Graham, were forced to resign their board posts at Vets for Freedom, a 527 political organization. The resignations accompanied McCain’s announcement of his campaign’s policy toward such groups:

“No person with a McCain campaign title or position may participate in a 527 or other independent entity that makes public communications that support or oppose any presidential candidate.”

On the board of CAGW, which has endorsed McCain, is his campaign’s Veterans Liaison, Orson Swindle. Swindle is a long-time friend and associate of McCain. They met as cell mates in a North Vietnamese prisoner of war camp where Swindle says that he and McCain “slept side-by-side for almost two years.” Politicians in bed with lobbyists? That’s nothing new. In fact CAGW has had problems of it’s own with one of lobbydom’s premier figures:

“CAGW has been criticized for accepting donations from organizations that benefit from its advocacy. Two years ago, investigators probing the activities of convicted lobbyist Jack Abramoff for the Senate Finance Committee examined whether CAGW advocated on behalf of Abramoff clients, including the Magazine Publishers of America, in exchange for donations. The committee concluded: ‘The e-mails show a pattern of CAGW producing public relations materials favorable to Mr. Abramoff’s clients.'”

But as far as compromised associates go, Swindle is a two-fer. In addition to being a 527 operative he is also a Senior Policy Advisor at the lobbying firm of Hunton & Williams. His specific charge is within the firm’s Center for Information Policy Leadership, which was founded to “develop innovative, pragmatic approaches to privacy and information security issues from a business-process perspective while respecting the privacy interests of individuals.” Their clients include dedicated privacy rights activists like American Express, Eli Lilly, GE, Microsoft, and Wal-Mart.

If nothing else, this election season is shaping up to be a masters course in media priorities. After weeks of perpetually looping video of Barack Obama’s former pastor, Jeremiah Wright, the hysteria appeared to be on the wane. Now, as if on cue, another minister has been catapulted to stardom by news broadcasters across the land. The only talent requisite for such fame is the ability to embarrass Sen. Obama, regardless of how tenuous your connection to him.

Hiding in the wings is Sen. McCain who has had his own problems with God’s messengers. He recently had to reject the support of bigoted Revs. Hagee and Parsley, whose endorsements he had actively pursued.

The media obsession with religion is characteristically shallow. It demonstrates a tendency to cling to tabloid sensationalism rather than to provide information about matters relevant to public service. With that principle in mind, broadcasters can relentlessly hype Obama’s crazy preachers while virtually ignoring McCain’s dubious connections to the real political power players that have infested his campaign. The difference between the two is that McCain’s associates would be very likely to have real influence over policy in his administration. They would end up in cabinet positions and other appointed regulatory offices. And, of course, they would still have their lobbying portfolio which would extend all the way up to the White House.

But expect the media to continue to put the spotlight on the sideshow because, let’s face it, we’ll never have video of corrupt lobbyists prancing and wailing the way crazy preachers do.