In an article aimed at criticizing President Obama’s handling of poverty in America, the reality-challenged Fox Nation re-posted a column by Stuart Stevens of the Daily Beast that makes a valid point about the absence of the media on the issue of poverty. Stevens notes that “An economy inflicting this much pain is a national crisis that should dominate discussion as we marshal our collective attention.”

However, the nauseating hypocrisy of Fox News seeps through this reporting and drenches it with a shameful, self-serving, political partisanship. Fox is not known for its advocacy of the downtrodden. To the contrary, they generally regard the poor as lazy moochers sucking at the government teat. They repeatedly air segments by rich anchors and pundits disparaging low-income workers and single mothers who use food stamps to feed their children. For example, Fox has hosted Robert Rector, a researcher from the ultra-rightist Heritage Foundation, on multiple occasions to argue that the poor are actually living luxuriously at the taxpayer’s expense. 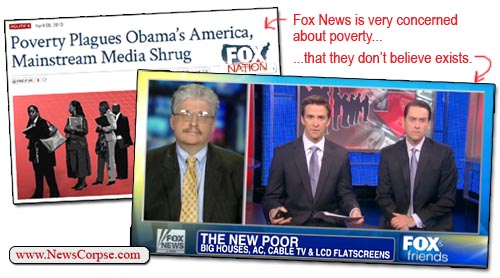 According to Rector, the “New Poor” are livin’ large in their big homes, chillaxin’ in the AC, and watching cable TV on big screens. Needless to say, Rector’s arguments don’t hold water factually or logically, but that isn’t even the point. Just last December, Rector appeared on Fox & Friends with a crackpot theory that poverty measurements are just “an advertising tool for expanding the welfare state and for spreading the wealth by pretending there’s a massive amount of hardship that really doesn’t occur anymore in our society.” He went further to make the astonishingly ignorant and insensitive claim that the poor “have no hardship whatsoever.” Rector’s ability to make poverty seem like a day at the beach is profoundly delusional.

Here’s the larger point: If characterizations of poverty as presented by Fox are true, then why is Fox now complaining that Obama is at fault for a “plague” of poverty? And why does Fox whine about the lack of media coverage when they themselves have provided coverage that denies the existence (or at least any hardship) of the poor?

Clearly the answer is that Fox couldn’t care less about the poor or about the the coverage that poverty receives in the media. They only care about exploiting every opportunity to criticize the President whether there is any merit in the arguments or not. And that’s how they can muster the audacity to feign concern for the poor whom they don’t think are suffering any hardship whatsoever. It’s a cynical and repulsive perversion of journalism at which Fox excels. It’s also a heartless exploitation of fellow citizens who have fallen on hard times, which Fox advances for the benefit of the Greedy One Percent who don’t want to hear about the poor anyway.

2 thoughts on “BREAKING: Fox News Suddenly Cares About The Poor (Not!)”