In a peculiar and suspicious chain of events, Fox News ran an article by commentator Todd Starnes with the provocative headline “Saudi National Questioned in Boston was on Terror Watch List.” But the article was not there for long, and has since been deleted from other conservative news sites as well.

There was no evidence in the article affirming the title’s allegation other than Starnes’ assertion that “sources have told me.” Starnes went on to say that his sources alleged that “Abdul Rahman Ali Alharbi had been deemed inadmissible” for entry into the United States because he was engaged, or likely to become engaged, in terrorist activity. “Two additional sources,” Starnes said, “have confirmed to me that Ali Alharbi is set to be deported as early as this week.”

The article also notes that national security officials, including Homeland Security Secretary Janet Napolitano, have denied the reports and stated explicitly that Alharbi is not being deported, nor was anyone else with any connection to the Boston marathon bombings. All of the chatter in the right-wing media about this was definitively debunked days ago.

Despite the dismissals by Napolitano and others of these rumors, Starnes weaves a speculative tale of innuendo that he fails to back up with any substance. The missing article echoes the conspiracy theories emerging from the fringe outposts of Alex Jones’ InfoWars and Glenn Beck’s The Blaze. Beck’s recent foray into these wilds of reckless slander has been titillating his fans for several days with promises of jaw-dropping revelations that he literally described as the most important story in the history of the country. His pledge to unveil the sordid details Monday went conspicuously unfulfilled. 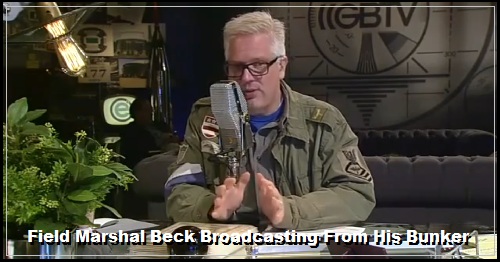 But here’s where the plot thickens. The delusional ravings of Jones and Beck might have been supported in some small measure by the article posted by Starnes. Mind you, Starnes did not have any better proof than they did that some untoward activity was taking place, but at least his column could have been cited as a rather useless and circular corroboration – and, in fact, Beck did just that. Which makes it all the more curious that Fox News made the column disappear. The link currently returns a “No Results Found” page. Making matters worse, Starnes also posted the article on the conservative Townhall web site, where it was also scrubbed. [Note: The Townhall article remains in Google’s cache]

What can explain this odd self-censorship by two separate, unaffiliated web sites? The articles simply vanished with no comment or correction. Was there a discovery that they were so far off base that they put the publishers in jeopardy of being sued for libel? If so, simply removing them would not be an effective defense without an apology for any harm done. It would more likely serve to prove that they had an awareness of the potential for harm and sought to cover up their actions. 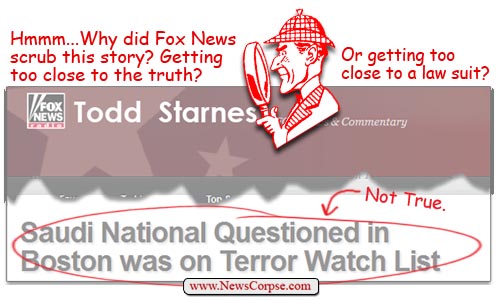 Another theory might be that Fox and Townhall are actually covert liberal agents who are in cahoots with Obama and the jihad movement and decided it would be better if they didn’t publicize these allegations. Plus they could sabotage Beck’s effort to reveal these harrowing truths and crush his credibility (if there were any left for crushing).

Alright, I know I shouldn’t be giving Beck any help in concocting his paranoid delusions. First of all, he’s better at it than I am. And secondly, it’s like giving a drug addict a fix. But what else might explain the behavior of Fox News, who ordinarily would leap at the opportunity to implicate Obama in some nefarious intrigue?

These missing articles create a mystery all their own, and it’s one that will likely never be solved because Fox is not forthcoming on matters related to their pseudo-journalistic endeavors. They rarely acknowledge errors in the best of circumstances, so we ought not to expect them to do so after having secretly excised a piece of dubious reporting. For all we are likely to ever know, these articles were just sucked into the black hole of Fox’s nightmare factory.

[Update 4/25/13] The articles referenced above are still missing and there have been no explanations or corrections offered. However, the “false flag” schemes they promote have been adopted by a GOP congresswoman from New Hampshire, Stella Tremblay, who said that “The Boston Marathon was a Black Ops ‘terrorist’ attack…by our own Government.”

Also, on Wednesday Beck interviewed a retired INS Special Agent on his webcast who disputed Beck’s account of the affair saying that “it doesn’t make sense.” Not surprisingly, Beck glossed over that portion of the discussion as if it hadn’t happened.